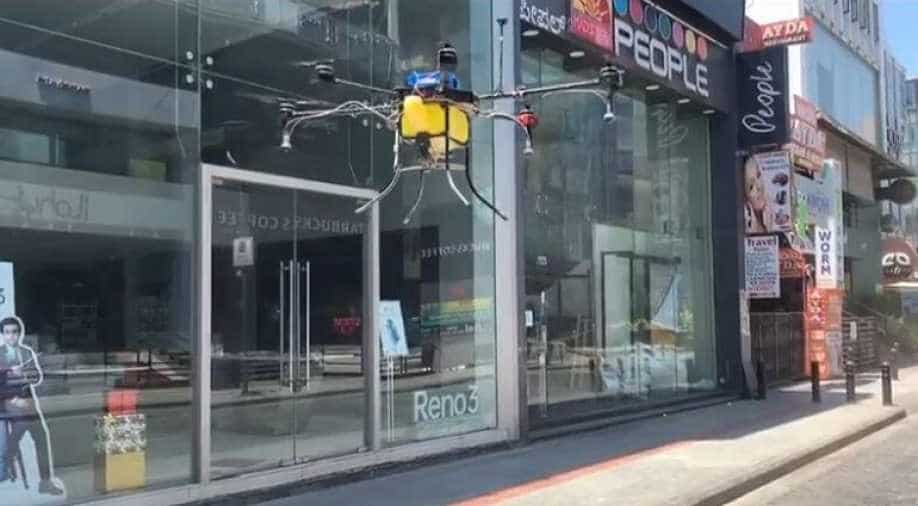 The drones are being used to cover highly crowded areas like railway stations, bus stops, markets and some of the major slums in the city.

In a bid to automate the drive to disinfect the city, Bengaluru has deployed 6 hexacopter drones to do the job. The hexacopters, developed by city start-ups Alpha drones and Multiplex drones are equipped with the 15-litre capacity and are manoeuvred through the city localities to disinfect it.

'The drones have a 5km range but we insist to fly them in the line of sight. We control it from a maximum of 100mt distance. The drone can fly for 25-30 minutes depending on the size of the payload. With a 15litre capacity, it can fly for the same period depending on the surroundings. It moves at a pre-set speed of 6mts per second.' says Neelsagar, Alpha Drones.

The drones are being used to cover highly crowded areas like railway stations, bus stops, markets and some of the major slums in the city. The drones use the cetrifuger automiser pump technology that enables it to disperse the disinfectant on land and air simultaneously. The disinfectant is provided by the local administration.

'We have done around 170 flights through which we have covered 45 localities like Brigade Road, Church Street, Commercial Street, Shivajinagar bus stop, Malleshwaram, Nandini Layout etc. The flight time of the drones is around 7 hours a day' says Neelsagar.

45 localities have so far been covered which includes some of the major commercial areas in the city and some bustling slums as well. The drones are being operated for 6-7 hours every day. The start-ups came onboard voluntarily and started the drive even before the purchase order was issued.