India speaks out against terror at SCO FMs' meet in Kyrgyzstan 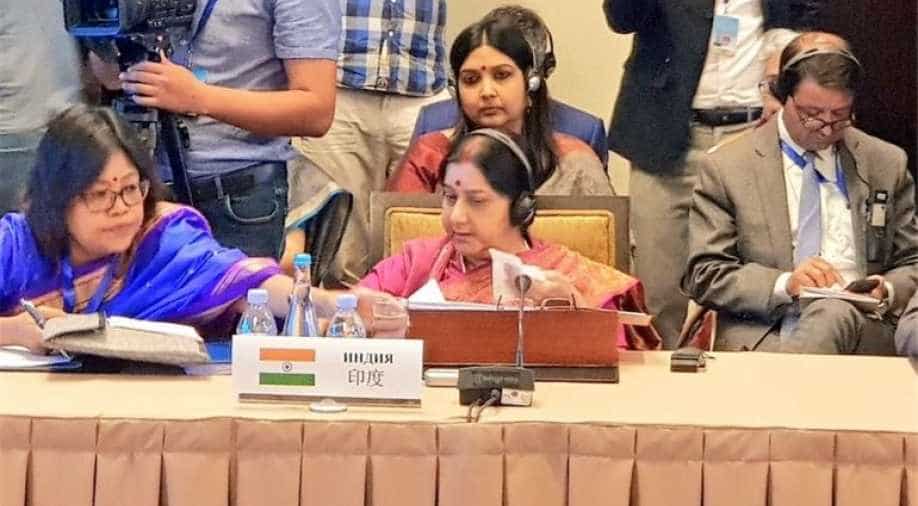 SCO's Regional Anti-Terrorist Structure or RATS has emerged as an important forum for counter-terror cooperation and India called for making it more effective.

Recalling the Sri Lanka terror attack on April 21, Swaraj said, "Our wounds of Pulwama attack were still raw and the news from the neighbourhood has made us more determined to fight firmly resolutely against this menace."

SCO's Regional Anti-Terrorist Structure or RATS has emerged as an important forum for counter-terror cooperation and India called for making it more effective.

But New Delhi said the connectivity projects needs to be, "inclusive, sustainable, transparent and respect the principles of sovereignty and territorial integrity", a comment that questions Chinese Belt & road initiative that is causing debt crisis in many countries participating in it.

On Afghanistan, Sushma Swaraj said, "India stands committed to any process" which can help "Afghanistan emerge as a united, peaceful, secure, stable, inclusive and economically vibrant nation, with guaranteed gender and human rights."

Comments on Afghanistan comes in the backdrop of Delhi's increased engagement with stakeholders such as the US, China, Iran and Russia on the Afghan peace process.

This is the last high-level engagement of Sushma Swaraj in a foreign country as the external affairs minister under the present government.

This is the second SCO FMs meet in which New Delhi is participating as a full member of SCO, the first meet held in April of 2018 in Beijing.

During the SCO FMs meet on Wednesday, Sushma Swaraj and her Pakistani counterpart Shah Mahmood Qureshi came face to face for the first time since the Pulwama terror attack on February 14 whose responsibility was taken by Pakistan based UN-listed terror group Jaish-e-Mohammed.

On expected lines, no meeting happened between the 2 India Pakistan ministers.

The last time both ministers were under the same roof was during informal SAARC meet on the sidelines of United Nation General Assembly in New York in 2018.

India got full membership of the grouping along with Pakistan in 2017 during the Astana summit of SCO with the process beginning during 2015SCO summit in Russia.

The SCO FMs meet comes weeks before the SCO leaders summit in Kyrgyzstan in which the new Indian Prime Minister will be participating. Focus in that summit will be on his likely meet with Chinese President Xi Jinping or if New Indian PM would like to meet his Pakistani counterpart —Pakistani PM Imran Khan.