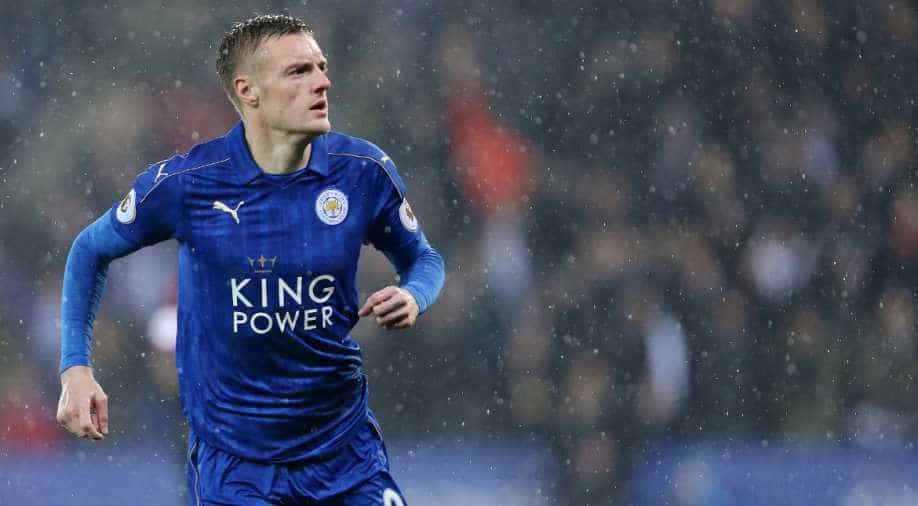 He completed his first hat-trick since his non-league days at Fleetwood Town Photograph:( Getty )

Jamie Vardy burst back to his predatory best with his first Leicester City hat-trick as the champions recaptured their title-winning mojo to earn a shock 4-2 win over Manchester City at the King Power Stadium on Saturday.

Vardy, hero of last season's fairytale triumph, finally ended his 16-match goalscoring drought for the club by scoring twice in the first 20 minutes as the Foxes, making a nonsense of their miserable recent form, raced into a three-goal lead.

After the England striker had struck in the third minute, club stalwart Andy King put Leicester two up with only four-and-a-half minutes on the clock and Vardy was then put in beautifully by Riyad Mahrez to score his second.

He completed his first hat-trick since his non-league days at Fleetwood Town from the narrowest of angles thanks to a careless back pass from John Stones.

Nobody could have imagined the drama of the opening minutes as Leicester awoke dramatically from what had, statistically, been the worst English title defence in 54 years since Ipswich Town in 1962-63.

Despite his heroics for Leicester, Vardy had never scored a hat-trick for them and his last treble had been for minor league Fleetwood in 2012.

Yet the King Power was transported back to heady May days, suddenly reminded why their team, languishing just three points off the foot of the table at the start of the day, were champions.

With a side unrecognisable from the second-string one that had been beaten 5-0 at Porto in midweek -- the heaviest defeat by any English team in European Cup history -- Leicester burst from the blocks on a rainy night.

A lovely touch from Mahrez fed Islam Slimani, whose neat through ball was finished brilliantly by Vardy, who had not scored in the league for a total of 741 minutes.

Within a couple of minutes, Slimani had teed up King, who curled one in from the edge of the box and the visitors were in disarray when a long ball from Christian Fuchs was cushioned delicately by Mahrez into Vardy's hungry path and the England striker evaded keeper Claudio Bravo to slot home.

City belatedly dominated but it was all huff and puff and when Stones hit a blind pass towards Bravo, Vardy nipped in to strike with the ball ruled to have just crept over the line via the post.

Kolarov, with a smashing free kick, and Nolito finally broke through but it could not mask what had been the most discouraging day yet of his new reign for visiting manager Pep Guardiola.