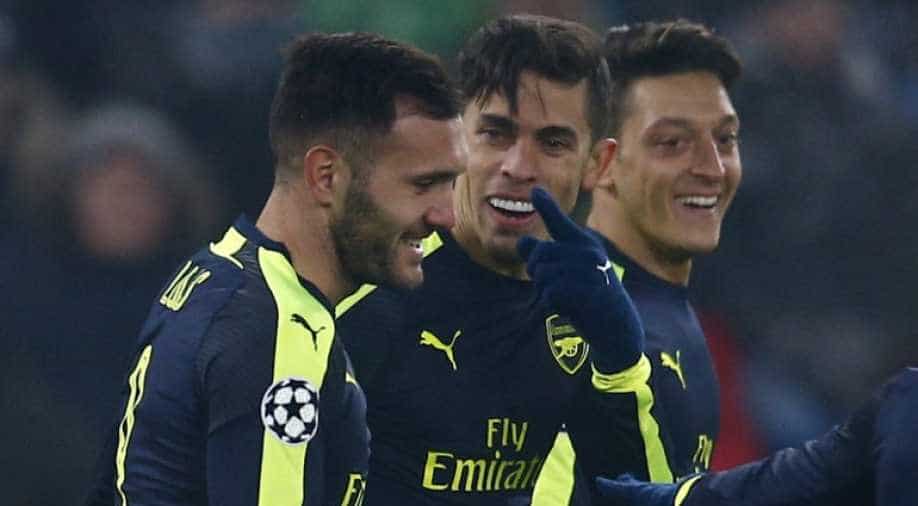 Beaten only twice in 23 matches in all competitions so far, Arsenal look far more resilient than in recent seasons, without losing any of their customary flair. Photograph:( Reuters )

The true value of Arsenal's table-topping display against Basel will not become clear until Monday's draw for the Champions League last 16 but a 4-1 win proved they are starting to punch their weight again in the competition.

Despite 19 consecutive group stage campaigns, defeat at the last 16 stage for the past six seasons has reduced Arsenal to members of the supporting cast.

While the A-listers -- the likes of Barcelona, Real Madrid and Bayern Munich -- march into Spring eyeing Europe's most prized club trophy, Arsenal have sloped away for domestic chores. Not even a title chase, rather just grinding out a top-four spot in the Premier League.

Beaten only twice in 23 matches in all competitions so far, Arsenal look far more resilient than in recent seasons, without losing any of their customary flair.

Hat-trick man Lucas Perez's second goal on Tuesday was the end product of a 33-pass move -- the longest sequence to goal so far in this season's Champions League. Arsenal went through Group A undefeated, the first time they had managed that since the 2005/06 season, and qualified for the last 16 as group winners for the first time since 2011/12.

That will guarantee they are spared a meeting with Lionel Messi's Barcelona in the last 16, although Bayern Munich or any two from Real Madrid, Borussia Dortmund, Juventus and Sevilla could be blocking their path after Christmas.

Arsenal will also enjoy a home second leg in the last 16, an advantage they have not had since 2012, although that year they were thumped 4-0 by Milan in the San Siro leaving them mission impossible in the return.

"It's difficult to know (the advantages of finishing top) you feel a bit less guilty," Wenger said. "At least we have done our job and let's see what happens."

In some respects the Champions League winter break may have come at the wrong time for Arsenal.

Chilean forward Alexis Sanchez, scorer of a hat-trick in Saturday's 5-1 thrashing of West Ham United, is playing some of his best football since joining the club, while Mesut Ozil in also in a rich vein of form.

On Tuesday, Wenger left the talents of Theo Walcott, Olivier Giroud and Alex Oxlade-Chamberlain on the bench while Lucas, a 17 million pounds ($21.54 million) signing from Deportivo La Coruna in August, grabbed his chance to shine.

"We needed to finish the group stage well to have no regrets and we started the game well by scoring two early goals," he said. "It was a good win for us to have after our big win on Saturday. It's important to finish first because we have the second game at home."