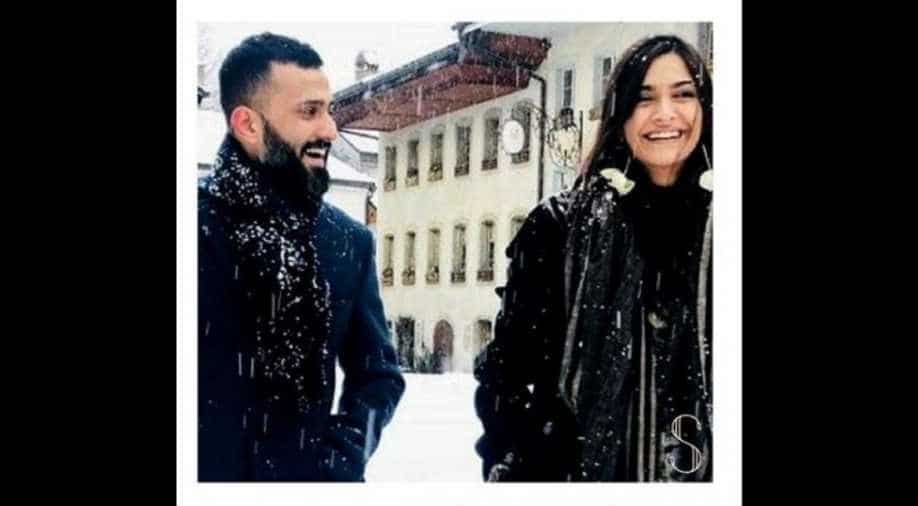 Sonam shared a motley of pictures and clips on Instagram on Sunday. In one video, Sonam is seen stealing a kiss from Anand while they were on a train.

Bollywood actress Sonam Kapoor Ahuja, who has wrapped up shooting for "Blind", has shared a romance filled post for her husband Anand Ahuja and thanked him for spending several weeks in Glasgow while she was shooting for her upcoming film.

Sonam shared a motley of pictures and clips on Instagram on Sunday. In one video, Sonam is seen stealing a kiss from Anand while they were on a train.

She wrote alongside the image: "Thanks to my amazing husband who spent 5 out of the 6 weeks with me in Glasgow... It was amazing coming back to him after shoot everyday... It would have been so much easier for him to work from home in London, but he was here with me as the most supportive encouraging and generous partner...

"Thank you @anandahuja .. I appreciate you and I`ll never take you for granted.. love you... #blind #gia," Sonam added.

Anand took to the comment section and wrote: "What are these photos and videos you crazoooooo. Congratulations! Happy to be here with you and see you in some SERIOUS action!"

Sonam will be seen in the role of a visually-handicapped person in the upcoming thriller, produced by Sujoy Ghosh.

The action-thriller revolves around a blind police officer who is in search of a serial killer. The cast also features Vinay Pathak, Purab Kohli and Lilette Dubey.

The film is based on a South-Korean film of the same name that was released in 2011.