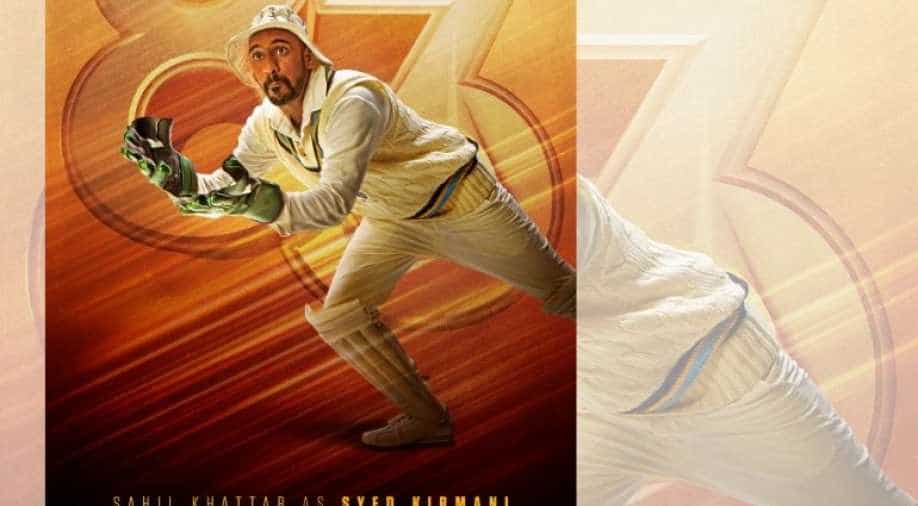 The sports-drama also has Deepika Padukone in the lead role opposite Ranveer, helmed by Kabir Khan, the movie is slated for release on April 10.

In a step towards completing the 1983 World Cup-winning team, Ranveer Singh on Sunday introduced the ninth player by sharing the character poster featuring Sahil Khattar as Syed Kirmani.

The 34-year-old actor hopped on to Instagram and shared the poster featuring the wicket-keeper, and captioned the post as, "THE GOLDEN GLOVE. Kiri Bhai da Javab nahi! Presenting @issahilkhattar as the one and only SYED KIRMANI !!! "

In the poster, Sahil Khattar was caught in a shot while catching the ball. Sahil seems to nail the look of the wicketkeeper, who was warded by the prestigious honour of CK Nayudu Lifetime Achievement Award. Syed Kirmani is known for his impeccable wicket-keeping skills which lead the Indian cricket team to the victory in 1983.

Tahir Raj Bhasin will be playing Sunil Gavaskar. Jiiva will be seen as the top scorer in the final match of the 1983 world cup against West Indies, K Srikkanth. Saqib Saleem will play Mohinder Amarnath and Jatin Sarna will portray Yashpal Sharma.

The sports-drama also has Deepika Padukone in the lead role opposite Ranveer. The movie also features R Badree, Pankaj Tripathi, Ammy Virk, and Saahil Khattar as the Men in Blue. Helmed by Kabir Khan, the movie is slated for release on April 10.