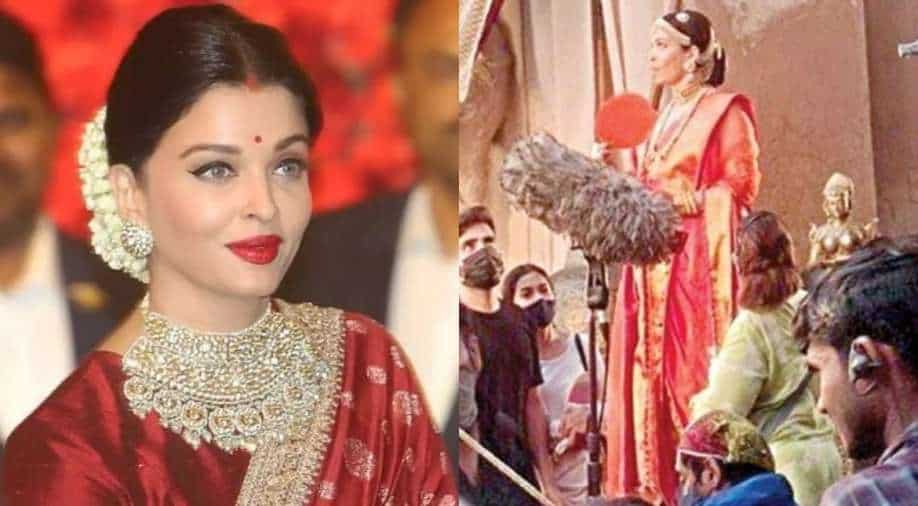 In the photograph, Aishwarya Rai Bachchan can be seen standing on a platform in a red silk saree, fanning herself.

Bollywood star Aishwarya Rai Bachchan's look from her upcoming movie 'Ponniyin Selvan' has remained a secret for a long time.

On Tuesday, however, that changed when a picture of the actress from the film's sets was leaked online.

In the photograph, Aishwarya can be seen standing on a platform in a red silk saree, fanning herself. She is wearing heavy gold jewellery and is surrounded by members of the film crew. A boom mic is held up next to her as well.

In the poster, a sword & shield can be seen with a fire stripe piercing through the shield in the centre. Ash—as she is known in Bollywood—dropped the first poster on Instagram and captioned it as, “The Golden Era comes to Life Mani Ratnam’s Ponniyin Selvan ?PS1.”

For the uninitiated, Ponniyin Selvan is a Tamil period drama co-written, directed and co-produced by Mani Ratnam. Elango Kumaravel and B. Jeyamohan have co-written the film with Mani Ratnam. The film's music will be composed by AR Rahman.

It is an adaptation of Kalki Krishnamurthy's historical period-based fiction novel by the same name.