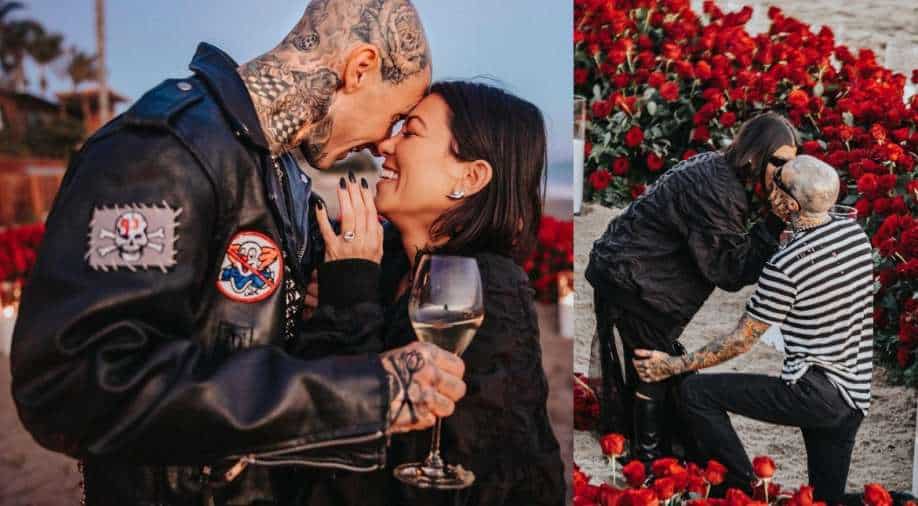 On Wednesday, Kourtney Kardashian shared a carousal of pictures from the day of the proposal and captioned it as: "I woke up all night thinking it was a dream." To which, Barker commented, saying: "Forever with you is a dream come true."

Reality TV star Kourtney Kardashian and her musician partner Travis Barker are happily engaged. And her fans' wish to see more intimate pictures from their grand proposal has finally been granted by the gorgeous pair.

On Wednesday, Kourtney shared a carousal of pictures from the day of the proposal and captioned it as: "I woke up all night thinking it was a dream."

To which, Barker commented, saying: "Forever with you is a dream come true."

In these now viral pictures, Kourtney's huge diamond ring is on display for the world to see as the duo happily indulge in some PDA. The floral decor by the beach just adds to the romanticism of the moment.

Barker, too, posted a carousal on his Instagram account, writing, "My fiancé 🌹🖤." The lady responded to his post, saying "Forever @travisbarker." He then wrote back, "FOREVER ♾"
Kourtney Kardashian and Travis Barker had been friends and neighbours for a long time before they started dating in January this year.

While American reality TV star Kourtney Kardashian is on cloud nine following her romantic proposal and subsequent engagement to Travis Barker, there's a certain someone who's burning with envy (of course, allegedly!).

Also read: In pics: Sarah Jessica Parker stuns in Falguni and Shane Peacock lehenga on 'And Just Like That' sets

Scott Disick--Kourtney's ex and the father of her her three children--has reportedly not taken the news very well.

"Scott is stewing over Kourtney and Travis' engagement and not happy at all. He's lonely right now and not in a relationship, and is very jealous that things are working out for Kourtney. Scott would prefer to go back to when him and Kourtney were just getting along as co-parents without anyone else in their lives romantically," a source has told an international news website.

"He's trying to figure out his next move when it comes to their kids. Kourtney is trying to ignore any negativity from Scott because she has been down that road too many times to count and is just enjoying this moment,"  the source continued.