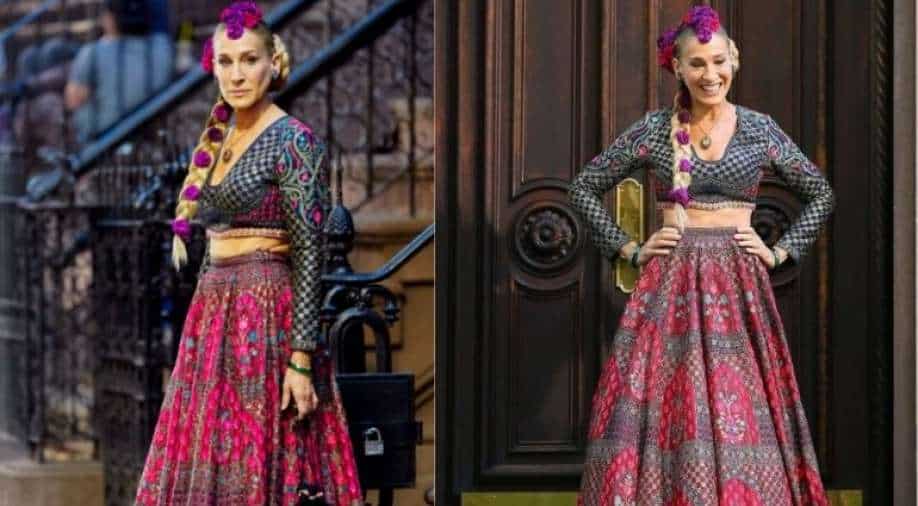 HBO is coming back with  'Sex in the City' reboot series 'And Just Like That' this December.

Sarah Jessica Parker is back as Carrie Bradshaw and so is her impeccable fashion!

Parker, who is currently busy shooting 'Sex and the City' reboot series 'And Just Like That' in New York, was spotted wearing a traditional Indian ensemble and netizens are swooning over her look.

Slaying in a gorgeous lehenga, Parker was wearing a dress by ace Indian designer duo Falguni and Shane Peacock! Taking to her Instagram Stories, Falguni shared pictures of Parker wearing the lehenga.

In the pictures, Parker is looking vibrant in fuschia pink and blue chequered pattern lehenga. She paired the same with an embroidered sleeved blouse that has a plunging neckline. Taking the Indian-ness of her outfit to a whole new level, Parker wore floral maang tikka and tied her hair in a braid, adding a bunch of fresh flowers as well.

Now, HBO is coming back with the 'Sex in the City' reboot series, 'And Just Like That', this December. The show will follow the lives of Carrie, Miranda, and Charlotte as they navigate friendship in their 50s. Meanwhile, Kim Cattrall, who played the sensational Samantha, is not reprising her role in the reboot.

The upcoming series will consist of 10 half-hour episodes.