'Female Pleasure' premieres in India: Vithika Yadav opens up to WION about her film on female sexuality 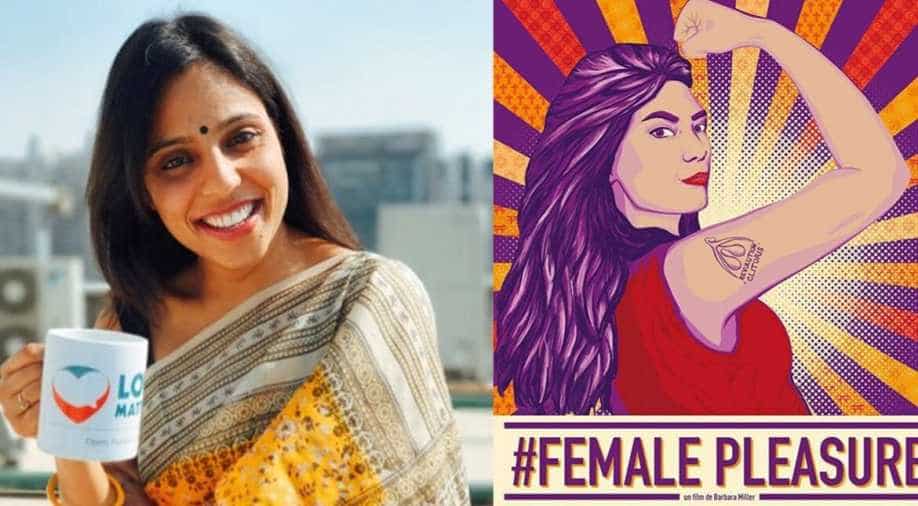 The Swiss-German feature ‘Female Pleasure’ will be screened today on September 22 at the European Union Film Festival in Mumbai. In a chat with WION, Vithika spoke about the film, challenges in making sex and love an open dialogue & the responsibility of Bollywood films in the narrative.

The European Union Film Festival (EUFF) in India is now running in its last leg as it premiered in Mumbai on September 20, 2019 with the screening of the Slovakian film ‘Backstage’. The festival will open Swiss-German 2018 documentary feature ‘Female Pleasure’ directed by Barbara Miller today on September 22 as it brings to light the stories of five women from different countries and cultures talking about how the world looks at female sexuality in the 21st century by way of their personal experiences.

Indian activist Vithika Yadav is one of the five women featured in the film ‘Female Pleasure’ that takes a personal approach on how through their work, they are aiming to change social norms concerning a female body and its rights. In a candid chat with WION, Vithika spoke about the film, challenges in making sex and love an open dialogue, responsibility of popular culture and Bollywood films in the narrative & much more.

Vithika feels that she is “fortunate and honoured to be a part of the film". Explaining the film and its plot in a nutshell, she said, “We are sort of leading a movement talking about love, sex and relationships. In that sense, the film is a beautiful journey that opens up your eyes at the fact that it's not only about certain communities and cultures, not prevalent only in developing countries but pretty much around the world. How we (women) are manipulated to really feel like second class citizens and how patriarchy has such a strong role to play in that.”

She added, “When I look at it, the struggle is global and response to that is global. There is so much inspiration and we are not alone in this.”

While most female-oriented stories that talk of patriarchy and its fallouts takes a pedestal-approach, the activist-cum-actor pointed out that her part of the film “takes everyone together -- it’s not male bashing, it’s questioning patriarchy.”

The activist took up the film, as it was “about real people and follows their journey as is" and added, “In the film I am the only woman who does not come from a place of abuse as such. Since my part of the film brings hope and happiness to the audience, I can say that it’s something different from what people are used to seeing from India.”

Since the film deals with a sensitive topic, largely considered a taboo, Vithika feels that the biggest hurdle to a healthy sexual life for a woman is “the fact that we don't even want to acknowledge it.”

“That women have a right to their sexuality. Claiming their sexuality and just talking about they feel good about. In layman’s language, how many women in the country know what is pleasurable in sex when it comes to them? Do they have a right to feel or do what they feel good about? To not do what they don't enjoy. It’s not just about orgasms but everything like reproductive choices that they want to make, people they want to be with. These are the things that the film really forces you to think about,” she added.

Vithika puts the onus on the society and it’s conditioning to be categorised a ‘good girl’. “One has to also acknowledge the centuries of telling us, of social norms being that women needn’t know about it (sexual priorities).”

“In my generation we grew up like that -- you don't want to be that girl. You don’t want to be seen as somebody who is not a ‘good girl’. The popular culture and popular media along with social norms have really pushed this perspective. Popular media aka Bollywood films have fed us with what a good girl vs. a bad girl would look like -- how they dress up, behave, act like,” she elaborated.

But not all is lost as the activist-actor believes that times are changing and “these lines are getting blurred” vis-à-vis the films and its narratives. She said, “We are now seeing women in a different perspective and we are also beginning to see some of that reflected in our real life. Conversations will not change overnight but we have to keep moving in that direction.”

She also pointed out that the shift can be credited to the emergence of different mediums of entertainment as we are not solely dependent on one form of mass media. Vithika said, “This is the digital generation that is not just viewing content but generating their own. The space is more dynamic.”

“Lines are being blurred now, the good and bad is becoming more grey. We are not defining good and bad, but there is also a reverse pressure to fit in, which is why the popular culture and media has to have a balance. At Love Matters that is what we do -- it is about thought provoking content that its readers would like to read as it is changing the gender social norms without making it sound activism. Bollywood obviously goes in one extreme direction, that’s the problem and we are definitely not seeing any progress on TV for that matter.”

‘Female Pleasure’ has received a standing ovation at every film festival it has travelled to but there has been very less talk about it in the Indian media while Bollywood film stars get a detailed coverage every time they walk a red carpet. Vithika took a while before she said that the focus of Indian media when a Bollywood star walks the carpet is on their designer clothes and added, “Personally I also don't remember looking at them for the film they are going to attend. The discussion is about their gown and that’s okay but we haven't seen any value come out of it. Come to think of it, this film has got standing ovations and there has been a lot of global media attention but it’s still not seen as a celebrity film because it features an activist.”

The film ‘Female Pleasure’ will be screened in India for the first time today in lieu of the festival even though it released in 2018 and has received rave reviews worldwide. On making it available to masses, Vithika said that the producers want a pan-India theatrical release but getting an approval from the censor board would be a problem as it deals with a lot of “sensitive content”.  She added, “I think we have a better chance if we look at Netflix or Amazon or any other streaming platform.”

The film follows the story of five activists -- American author Deborah Feldman, Somali psychotherapist Leyla Hussein, Japanese manga artist Rokudenashiko, Bavarian scholar Doris Wagner and Indian Vithika Yadav. It is one of the 23 films that are being screened at the EUFF in India. The Film Festival was inaugurated by Raimund Magis, Chargé d'affaires, Delegation of the European Union to India, Ivan Lančarič, Ambassador of the Slovak Republic to India at the National Museum of Indian Cinema in Mumbai.