This Guinness World Records compilation will leave you awestruck 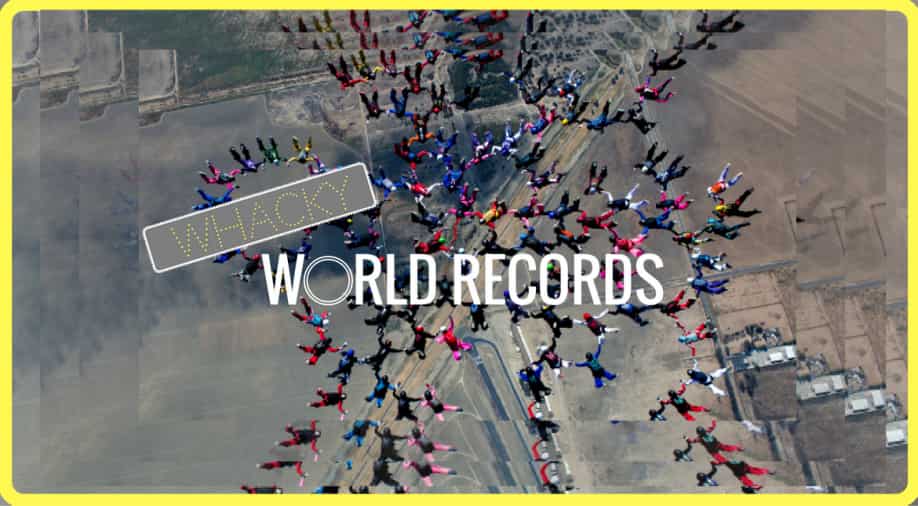 Here are some of the most thrilling Guinness World Records created by individuals and groups by doing what they are passionate about:

117 women from around the world came together to take the Guinness World Records title for 'Parachuting - largest sequential freefall formation (female)'. Gliding from 7,000 feet above the ground, they managed to interlock hands and form a snowflake-shaped pattern in mid-air in order to bag the title.

Diver training agency Raid Italia recently set the record for the 'Longest human chain underwater,' putting together an incredible 173-person line in the sea on Elba Islands in Bologna, Italy.

Most Lit Candles On A Birthday Cake

Ashrita Furman and members of the Sri Chinmoy Centre, while celebrating their meditation teacher Sri Chinmoy’s 85th birthday, created a record for 'Most candles on a birthday cake'.

Johanna successfully achieved the record for the Longest swim under ice - breath held' (no fins, no diving suit) for a woman, covering an impressive 50 metres. The attempt took place during an ice-diving event. A hole was cut in the 30-cm-thick ice and Johanna dived into the freezing water and successfully swam the pre-measured track.

Most Magic Tricks Performed On A Skydive

Martin Rees, a 28-year-old magician created a new record for the 'Most magic tricks performed in a single skydive', taking his unique combination of daring and sleight of hand to greater heights. The thrill-seeking entertainer completed 11 magic tricks while on a 15,000 feet skydive over Salisbury, hitting a velocity of 120 mph during free-fall.

On a football field in Krailling, Germany, Intel  set a new record for the 'Most Unmanned Aerial Vehicles (UAVs) airborne simultaneously,’ with 500 drones performing a flawless routine together, lighting up the evening sky. Hundreds of individual drones each fitted with an LED light put up a spectacular show.

Stéphanie Gicquel along with her husband set a new record for the 'Longest assisted journey across Antarctica on skis (female)' by travelling 2,045 km (1270.7 miles). She skied from Messner Start to Hercules Inlet between 14 November 2014 and 27 January 2015. The couple received resupplies during their travels but they completed the entire distance by themselves, without any assistance from wind kites, motors or dogs.

415 people participated to create the ‘Largest parade of kite surfers’ at Dolphin Beach in Cape Town, South Africa. Following a signal, the kite surfers set off one at a time from each zone and began travelling down the 2.41 km (1.5 mile) course. It took around three hours for all the successful surfers to cross the finish line.