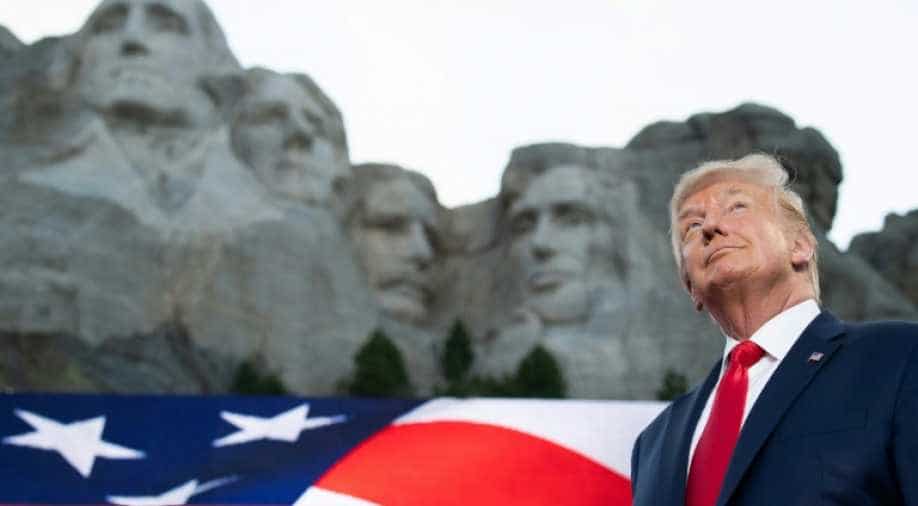 Has Trump been of any help? Photograph:( AFP )

The US coronavirus death toll is fast approaching 1,30,000, roughly one-quarter the world's total, even as many European countries are edging back toward normality. Social distancing is the need of the hour, and this need is science-based.

A normal July 4 weekend in the United States would be one that of pomp and show -- with popular beaches packed. But summer 2020 has not been all that kind to the US -- as with the rising number of coronavirus cases, there's the Black Lives Matter movement that has taken over the nation.

The US coronavirus death toll is fast approaching 1,30,000, roughly one-quarter the world's total, even as many European countries are edging back toward normality.

Social distancing is the need of the hour, and this need is science-based.

To this end, across the country, Main Street parades have been cancelled, boisterous backyard barbecues scaled down, and family reunions put off amid worries about air travel and concerns about spreading the virus.

Some events will be held virtually, as states and cities grapple with a new surge in the coronavirus, using a mix of admonitions and prohibitions. Miami Beach, for one, has imposed a weekend curfew and made it mandatory to wear a mask in public.

Fireworks displays are typically a high point of the holiday, with crowds of thousands gathering to ooh and aah, but an estimated 80 percent of the events have been cancelled this year.

What has cast a particularly darker cast on the celebrations is Trump's speech in South Dakota.

While presidents' July 4 speeches traditionally are uplifting affairs that emphasise patriotism and national unity, Trump's speech angrily lashed out at the protests that have erupted since the death at police hands of George Floyd.

Trump denounced "violent mayhem" on US streets, though most demonstrations have been peaceful, and accused protesters of waging "a merciless campaign to wipe out our history, defame our heroes, erase our values, and indoctrinate our children."

In his Mount Rushmore speech, Trump made little mention of the pandemic that has hit his re-election hopes, even as COVID-19 moved further into Trump’s inner circle. Kimberly Guilfoyle, a senior campaign official and the girlfriend of Donald Trump Jr., tested positive in South Dakota before the event.

It's assumed the guile in the speech came from the fact that Trump faces a tough re-election battle in November and is eager to mobilise his political base. But his presumptive opponent in the fall, Democrat Joe Biden, has struck a sharply different tone on the country's raw racial tensions. He tweeted on Saturday: "Our nation was founded on a simple idea: We're all created equal. We've never lived up to it — but we've never stopped trying. This Independence Day, let's not just celebrate those words, let's commit to finally fulfill them."

A large protest, planned for Sunday, is expected to include a George Floyd memorial March beginning at the Lincoln Memorial; a Black Out March at the US Capitol; and a Black Lives Matter protest at the National Museum of African American History and Culture.

All the protests -- in theory -- should be over before the night's celebration on the Mall.

Trump, fresh from his appearance Friday before the monumental sculpture of four presidents on Mount Rushmore, plans to be on the Mall for a "Salute to America" complete with military music and flyovers.

Public health officials have hence been bracing for a new spike in virus cases after this grim weekend's celebrations and protests.