Who is winning the Ukraine war? 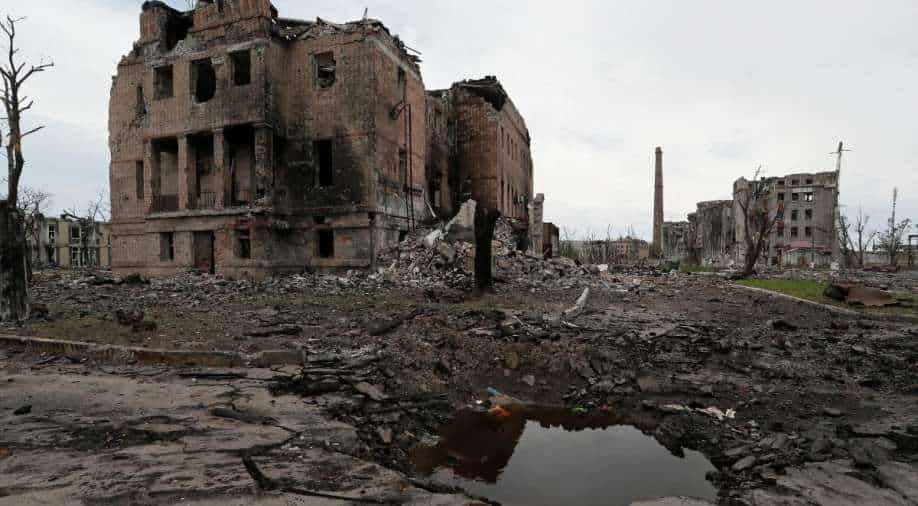 A view shows destroyed facilities of Azovstal steel plant during Ukraine-Russia conflict in the southern port city of Mariupol, Ukraine May 22, 2022. Photograph:( Reuters )

There are no clear winners. Both Moscow & Kyiv keep making claims & counterclaims of having the upper hand. But in the fog of war, nothing can be seen clearly.

On 24 February 2022, when Russia launched its assault on Ukraine many assumed it would be more of shock & awe. The much superior Russian military would soon overpower its much weaker neighbour. But four months on the battle rages on. There are no clear winners. Both Moscow & Kyiv keep making claims & counterclaims of having the upper hand. But in the fog of war, nothing can be seen clearly.

Ruslan Bortnik Director of the Ukrainian Institute of politics, from Kyiv, told Wion that 'Russia was unable to use the effect of surprise and the most prepared part of its army to achieve a quick surrender of Ukraine. But strategically, the Ukrainian state, the economy and the armed forces suffered a lot of damage, which will definitely have a negative impact on Ukrainian opportunities in the future.'

In an op-ed Joe Biden, President of the United States, said, 'the Ukrainian people surprised Russia and inspired the world with their sacrifice, grit and battlefield success.' Something even the Kremlin won't disagree in private. But the war has caused great pain like any other conflict. Thousands of Ukrainian civilians are killed; millions more have been forced out of their homes. The incessant Russian assault has reduced entire cities to rubble.

The theatre of battle has now shifted east to the Donbas region. In eastern Ukraine, Russian forces have been making slow but steady advances after being beaten back from other parts of the country, including Kyiv. With a see-saw battle for control of the strategically important city of Severodonetsk raging on, regional governor Sergiy Gaiday said that his country's forces now control “half of the city”. If the claims are true then it would be a great tactical advantage as the Ukrainian troops were on the verge of being driven out of the key cities. Severodonetsk -- the largest city still in Ukrainian hands in the Lugansk region of the Donbas region -- has been a focal point in recent weeks.

The United States last week announced it would give Kyiv its high mobility artillery rocket system, known as HIMARS, which can simultaneously launch multiple precision-guided missiles & is superior in range & precision to existing systems Ukraine has. It is the latest in a long list of weaponry sent or pledged to the pro-Western country. The U.S. move prompted Russian President Vladimir Putin to warn on Sunday that Moscow will strike new unspecified "targets" if the West supplies the missiles to Ukraine & said new arms deliveries to Kyiv were aimed at "prolonging the conflict"

Boris Volkhonsky, Associate Professor, Institute of Asian and African Studies, Lomonosov Moscow State University told Wion, ‘If the West persists in its strategy of fighting Russia up to the last Ukrainian & goes on supplying heavy armaments to what is left of Ukraine, this may mean a much longer process & much greater number of casualties – both military and civilian. The sooner the West realises the futility of such attempts, the better.’

With the conflict raging on countries like Germany which were reluctant initially, have now pledged arms & ammunition to Ukraine. In the latest, the UK Ministry of Defence said it has coordinated closely with Washington over its gift of the multiple-launch rocket systems, known as MLRS, to help Ukraine defend itself against Russian aggression. The M270 launchers, which can strike targets up to 80 kilometres away with precision-guided rockets, will "offer a significant boost in capability for the Ukrainian forces," the ministry added. London has so far offered more than $937 million in military support to Ukraine. This includes air defence systems, thousands of anti-tank missiles & various types of munitions, hundreds of armoured vehicles & other equipment.

The NATO allies continue to stress that these weapons are defensive in nature and won’t be used to strike inside the Russian territory. But Moscow isn’t convinced. Over the last four months, as the battle intensifies, the U.S. & its European allies have pumped in more advanced & deadlier weapons to Kyiv. Russian forces meanwhile have claimed to have destroyed multiple batches of western weapons meant for Ukrainian forces.

So how is this conflict going to end? Well, Ruslan Bortnik told Wion, 'The war in Ukraine will end only when one of the participants in the war wins or all sides of the war are convinced of the impossibility of victory. At the same time, one must understand that the Ukrainian-Russian war is only part of the global confrontation between the United States & its allies and Russia and its allies for the right & rules to determine the new world order. This is how this war is perceived by all global states.'

Moscow's military campaign in Ukraine along with the crippling sanctions on Russia has disrupted supplies of fertiliser, wheat & other commodities from both countries, pushing up prices for food & fuel, especially in developing nations. Ships loaded with grain remain blocked in Ukraine, which before February was a leading exporter of corn & wheat & alone accounted for 50% of world trade in sunflower seeds & oil.  Putin has said Moscow is ready to look for ways to ship grain blocked in Ukrainian ports but has demanded the West lift sanctions.

Clearly, as the war rages on in Ukraine, it also compounds the problems around the world. The global economy was slowly coming out of the pandemic induced slowdown but the biggest military conflict in Europe in decades has added to the economic woes. This is continuously pushing up food & fuel prices around the globe.