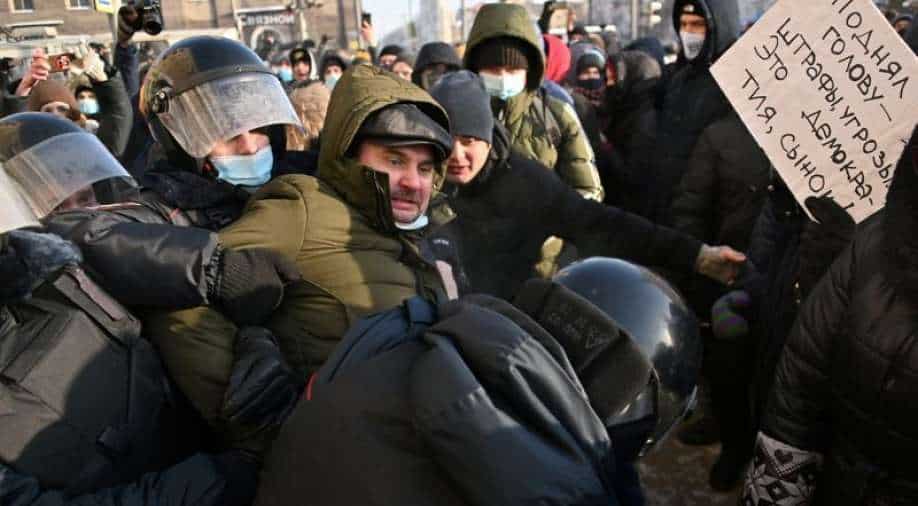 Smirnov’s retweet, according to court papers, 'calls on a group of individuals of unlimited size to take part in an unauthorized protest on January 23, 2021'

A Russian court Wednesday sentenced the editor of a popular news website to 25 days in jail for retweeting a reference to an anti-Kremlin protest, the latest sign of an extraordinary crackdown on freedom of expression following the return to Russia last month of opposition leader Alexei Navalny.

Until recently, President Vladimir Putin has mostly tolerated a vibrant landscape of independent online news outlets that took advantage of Russia’s uncensored internet to offer an alternative to the state-controlled television news. Similarly, Navalny’s allies and other opposition activists were rarely thrown in jail, an indication that the Kremlin saw them more as a nuisance than as a real threat.

But all that has changed in the last three weeks. Navalny’s livestreamed, dramatic return to Russia after recovering from poisoning in Germany, and his report on Putin’s purported secret palace, viewed more than 100 million times on YouTube, have highlighted the stark threat that the internet poses to the Kremlin’s hold on public opinion.

Navalny — who had never been forced to spend more than a few weeks in jail at a time — was sentenced to two years and eight months in prison Tuesday for violating his parole on a 2014 conviction that Europe’s top human rights court found politically motivated.

Then, Wednesday, Sergey Smirnov — the editor of news site Mediazona, which covered Navalny’s Tuesday hearing in meticulous detail — received a jail sentence of 25 days. His offense: retweeting a joke by another Twitter user about how a musician pictured in a Navalny advertisement calling for protests looked similar to Smirnov.

Smirnov’s retweet, according to court papers, “calls on a group of individuals of unlimited size to take part in an unauthorized protest on January 23, 2021.”

Smirnov said he was simply retweeting a joke and was not calling on people to come to the rally, which he said he did not attend.

“A retweet does not equal endorsement,” Smirnov told the judge at his hearing Wednesday, according to a reporter there.

Mediazona, founded by members of punk rock group Pussy Riot, focuses on criminal justice and human rights issues and is one of Russia’s most popular news websites independent of Kremlin control. One of those founders, Pussy Riot’s Maria Alyokhina, is among the Navalny supporters put under house arrest after having been detained at a protest last month.

“This is an attempt to silence honest and professional journalism,” Echo of Moscow, Russia’s best-known liberal radio station, said in a statement.

Smirnov’s jailing came after a night of police violence in central Moscow, where more than 1,000 people tried to protest Navalny’s prison sentence. They were met by an overwhelming show of police force — one Russian outlet reported that more than 8,000 police officers had been deployed — that flooded the grand squares and upmarket side streets near the Kremlin.

“We’ve woken up in a different country, one in which fascists have taken power,” Yevgeny Roizman, the former mayor of the city of Yekaterinburg and a Kremlin critic, wrote on Twitter. “They took over the country earlier, but they stopped hiding it yesterday.”

Police officers in Moscow were filmed swinging batons at pro-Navalny protesters who had their hands up, clubbing a journalist twice on the head and dragging people out of passing cars.

Across Russia, authorities have made more than 10,000 arrests in the past few weeks, according to OVD-Info, an activist group that tracks detentions at protests. Those jailed or under house arrest include most of Navalny’s closest allies inside the country and many of his key supporters in the regions.

The Kremlin reiterated Wednesday that it would not back down.

“There must not be any unsanctioned protest activity,” Putin’s spokesman, Dmitry Peskov, told reporters. “Unsanctioned protests are cause for concern, confirming that the police are justified in their tough, legal actions.”

Still, supporters of Navalny see momentum on their side, and those allies who have managed to avoid jail called on Russians to be patient and to keep fighting. Navalny’s prominence is now far greater than it was just a month ago, with extensive coverage even on the state television news. And, even in prison, he may have a unique ability to unite Russia’s disparate opposition — while those allies who are in relative safety outside the country will continue to try to reach Russians online.

The Navalny team’s strategy is to build its reach and visibility while chipping away at Putin’s legitimacy through corruption investigations and election campaigns against the Kremlin. His allies say they will also call for more street protests.

Vladimir Ashurkov, one of Navalny’s top allies, said his team had long understood that Russia’s pro-democracy groups were too weak to force political change on their own timetable. But he said they were confident that change would come, with dissatisfaction building in the general public and among the elite.

“Our strategy is to be the best-organized political force when things start to change,” Ashurkov said in a telephone interview from London. “We don’t know when that will happen.”

He said he had discussed plans with Navalny to call for sanctions against Russian officials, state media figures and business tycoons close to Putin — which Ashurkov did in a letter to President Joe Biden last week.

“We have a plan for how we are going to organize our work and how we will constantly pressure the authorities for his release,” Ashurkov said of Navalny.

Navalny has repeatedly embarrassed Putin and his allies with investigative reports about corruption that were viewed many millions of times on YouTube. Authorities previously tried to contain Navalny with jail terms of a few weeks to avoid turning him into a political martyr.

“We are entering a new period of instability and uncertainty,” Ashurkov said. “But no one knows how close we are to the period we are preparing for — when liberalization begins.”

Tatiana Stanovaya, a nonresident scholar at the Carnegie Moscow Center, described in a commentary the crackdown as the mark of a new phase in the Kremlin’s treatment of the anti-Putin opposition.

In years past, the Kremlin’s goal was to delegitimize the opposition in the eyes of the public and keep it out of official politics. Now, she said, it is being criminalized and cast as a national security threat.

At the same time, Putin’s critics are for the first time uniting around a single figure — Navalny.

“A time of great confrontation has arrived,” Stanovaya wrote.