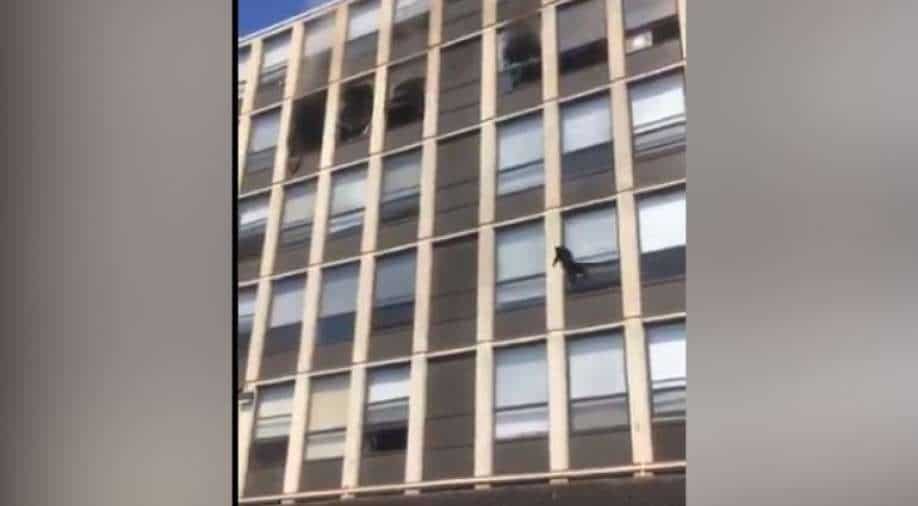 Cat jumps down from fifth floor of a burning building. Photograph:(Twitter)
Follow Us

After landing on the grassy patch, the cat bounced once on impact of force, and immediately ran away to hide under a nearby parked car

Talk about the cat's nine lives.

A feline’s magnificent jump for safety was caught on camera by the Chicago fire department when a fire broke on the fifth floor of a building.

A fire broke out in a building at the 65th and Lowe. The fire department was immediately called to the scene. As the Chicago Fire Department personnel were making a video of the exterior condition of the building, a black cat appeared in a smashed windowpane.

Nine lives for a cat that jumped from fire at 65th and Lowe. Cat hit grass bounced and walked away! pic.twitter.com/LRBsjMta2Z

The cat, within seconds, jumped straight down to save itself from the blaze. Upon jumping, the black cat narrowly missed a wall and instead landed on the nearby grassy area.

After landing on the grassy patch, it bounced once on impact of force, and immediately ran away to hide under a nearby parked car.

“It went under my car and hid until she felt better after a couple of minutes and came out and tried to scale the wall to get back in,” the fire department spokesman Larry Langford said.

The fire, which was contained in one apartment, was dealt with immediately and there were no casualties reported.

The cat was also reported to be safe and the authorities are looking for its owner.

The cause of the fire and the damage caused has not yet been reported.