Visibility was compromised due to heavy fog and precipitation from the squall, causing a mass pile-up of about 40 vehicles on Interstate 81 on Monday

At least three people died, and scores were injured after a snow squall caused a massive accident at Pennsylvania interstate highway that saw cars being piled-up.

Visibility was compromised due to heavy fog and precipitation from the squall, causing a mass pile-up of about 40 vehicles on Interstate 81 on Monday.

Over two dozen fire companies were rushed to the crash site, where multiple vehicles were on fire, Blickley said.

A video posted on social media on Monday shows a truck cruising along on a snow-covered highway around 11 am when the massive pileup appears suddenly in front of the driver.

Then, one by one, passenger cars start crashing into each other in less than a minute as people start yelling to stop their vehicles.

The pileup snarled traffic for several miles on the highway, making it difficult for emergency responders and rescuers to reach the site.

Other videos show the aftermath of the pileup. Drone footage of the scene shows dozens of cars and trucks pointed in various directions across the road.

Parts of the United States have been under the spell of heavy cold as a strong arctic front moved across the New York and New England region on Monday. 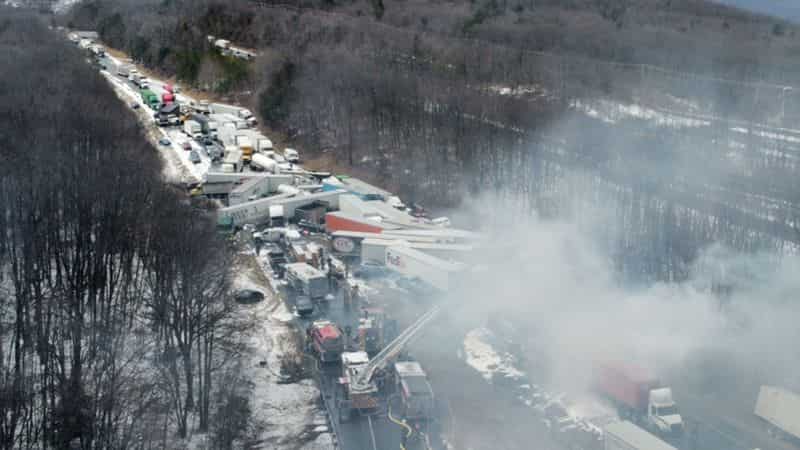 According to the Associated Press news agency, the National Weather Service had warned of "numerous brief heavy snow squalls with very poor visibility."

"The squalls will quickly reduce the visibility to under one-half of a mile and coat the roads with snow," forecasters said, urging drivers to get off the road if possible or turn on hazard lights.