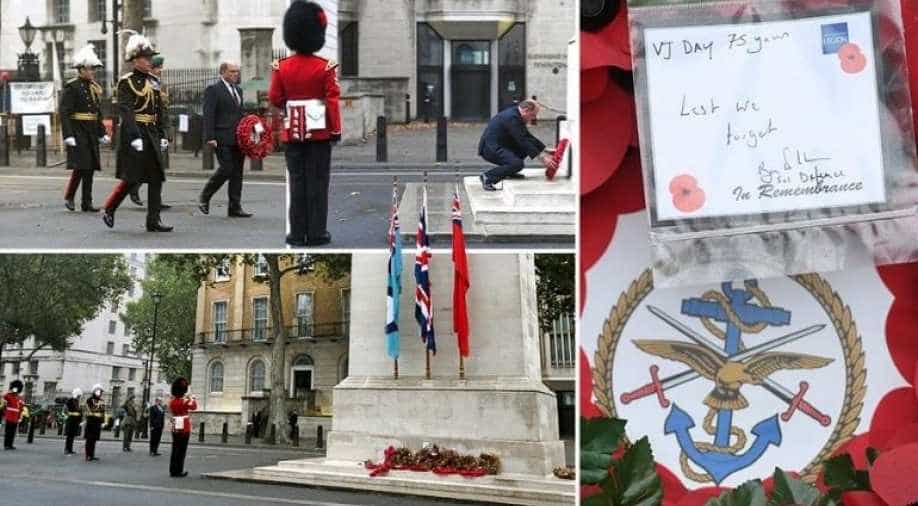 The Queen remembered the ‘terrible devastation’ of the Far East campaign on the 75th anniversary of VJ Day Photograph:( Agencies )

Britain, which had been a colonial power across much of the region, suffered arguably its biggest military defeat to Japanese forces in the early years of World War II.

British Prime Minister Boris Johnson is paying tribute to veterans of the multinational World War II campaign against Japan, which formally ended 75 years ago some three months after Nazi Germany had been vanquished in Europe.

In an open V-J Day anniversary letter released Saturday and addressed to Veterans of the Far East Campaign, Johnson hailed the courage of those who fought in Asia and the Pacific.

The six-year campaign cost the lives of some 50,000 British and Commonwealth troops, nearly half of whom perished in brutal prison camps.

You were the last to come home but your achievements are written in the lights of the glittering capitals of the dynamic region we see today," he said.

Following the surrender of the Nazis on May 8, 1945, V-E Day, Allied troops carried on fighting the Japanese until an armistice was declared on August 15, 1945.

Japan formally surrendered on September 2, 1945, but many Pacific War veterans felt their efforts were not fully recognised and dubbed themselves the forgotten army.

Johnson acknowledged their war-time experiences had been overshadowed in popular imagination by the conflict in Europe," but he stressed that their service had brought World War II to an end and inaugurated a period of peace and prosperity across southeast Asia that remains intact to this day.

Britain, which had been a colonial power across much of the region, suffered arguably its biggest military defeat to Japanese forces in the early years of World War II.

Overwhelmed troops had to retreat from Malaysia, Singapore and Burma in some of the most inhospitable conditions imaginable.

''These blows were so heavy that many feared they would break your will to fight on. But you survived the longest retreat in British history, marching almost 1,000 miles from Burma to India, and then you regrouped and reformed," Johnson said in his tribute letter.

The prime minister also highlighted the creation of the formidable 14th Army, a fighting force that was made up of nearly a million soldiers, including from India and Africa, and which helped turn defeat into victory.