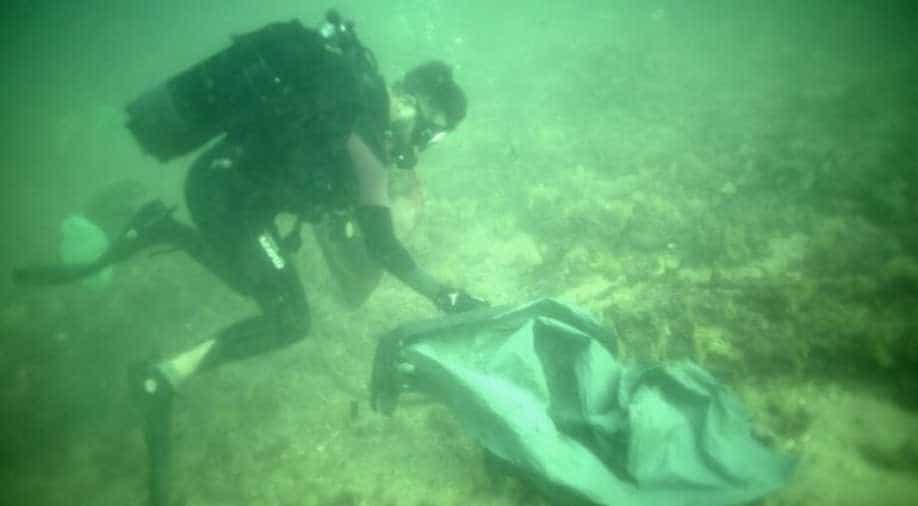 A handout image made available by Oceanium de Dakar shows a scuba diver collecting plastic and other waste from a bay during a 'clean-up day' campaign of the ocean off the coast of Goree island on September 15, 2019 Photograph:( AFP )

The snakes seem to believe that divers are rivals or potential mates, the study noted

Sea surfers and scuba divers beware! A new study has claimed that highly venomous sea snakes who are sexually aroused have the tendency to attack human divers after confusing them with other snakes during the mating season.

The snakes seem to believe that divers are rivals or potential mates, the study noted.

Researchers from three Australian universities working on the southern Great Barrier Reef found that Olive sea snakes, especially males, had repeatedly approached divers, made “fast, jerky movements” and were particularly active in the winter when they breed.

The acts of aggression are likely because of “mistaken identity during sexual interactions”, wrote Tim Lynch, of CSIRO in Hobart, Ross Alford of James Cook University in Townsville and Richard Shine of Macquarie University in Sydney, in the study published by Scientific Reports.

“At first sight, the idea that a snake might mistake a human diver for another snake seems ludicrous, given the massive disparity in size and shape between those two objects,” the Guardian cited the researchers’ observations

“Nonetheless, this offers the most plausible explanation for our observations.”

Though there have been other several examples of marine animals sexually targeting humans, including male dolphins, dugongs, sea lions and sea turtles

But the latest study has raised eyebrows since the olive sea snakes have the capacity to inject deadly venom and instantly decapitate humans.

“A bite is unlikely unless the animal is threatened or injured,” the researchers wrote, advising divers to stay still and allow snakes to investigate them, including by using their tongues to look for chemical cues.

“Attempting to flee is likely to be futile and may even increase the ardour of the pursuit,” the researchers noted. “Attempting to drive the animal away may induce retaliation.”