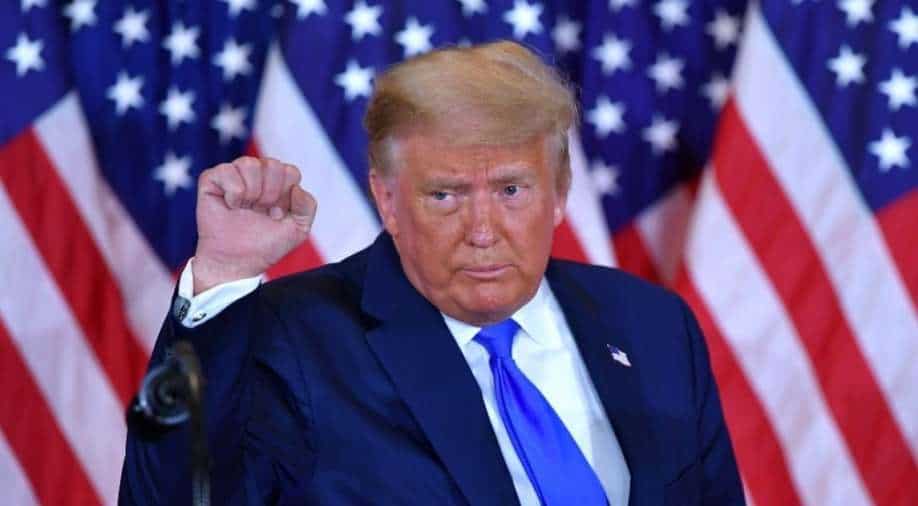 US President Donald Trump pumps his fist after speaking during election night in the East Room of the White House in Washington, DC Photograph:( AFP )

The Trump campaign has filed a lawsuit in the state of Georgia asking to pause the counting of the votes of the states for the US Presidential election.

As the US election results started pouring in, the current President Donald Trump was heard saying losing is not easy, especially not for him. Later, when the former Vice President and Democratic nominee Joe Biden addressed the nation and asked people to "keep faith" in the system, Trump, too, decided to address the nation and told people the system is a fraud.

Donald Trump, during, his address told the country that he will be moving the Supreme Court and asked for all vote counting to stop alleging fraud and accusing his opposition of manipulating the election results, or as Trump describes it, "cheating".

The lawsuit has been filed against the Chatham County Board of Election, and as per this lawsuit, the Trump campaign wants the judge to ask the county to secure and account ballots received after 7 pm on the election day, i.e. November 03.

"President Trump and his team are fighting for the good of the nation to uphold the rule of law, and Georgia’s law is very clear: to legally count, mail ballots must be received by 7:00 p.m. on Election Day," deputy campaign manager Justin Clark said in a statement.

Also read| US formally leaves Paris climate accord after US election results; Biden vows to return

As per various local reports, the Trump campaign is aiming to start a multi-pronged legal attack in various key battleground states after the election results night. The President wants the justice system to intervene in a pending US Supreme Court case that has yet to decide whether or not the mail-in votes received after the election day should be counted or not.

Some reports have also stated that the Trump campaign has also filed similar lawsuits in Michigan and Pennsylvania, seeking to halt vote counting and have accused the officials of not releasing a fair number.

“The Trump campaign is filing a number of meritless lawsuits around the country. Don’t be deceived,” Democratic Party lawyer Marc Elias said on Twitter. “They know they have lost and this is all they have left.”