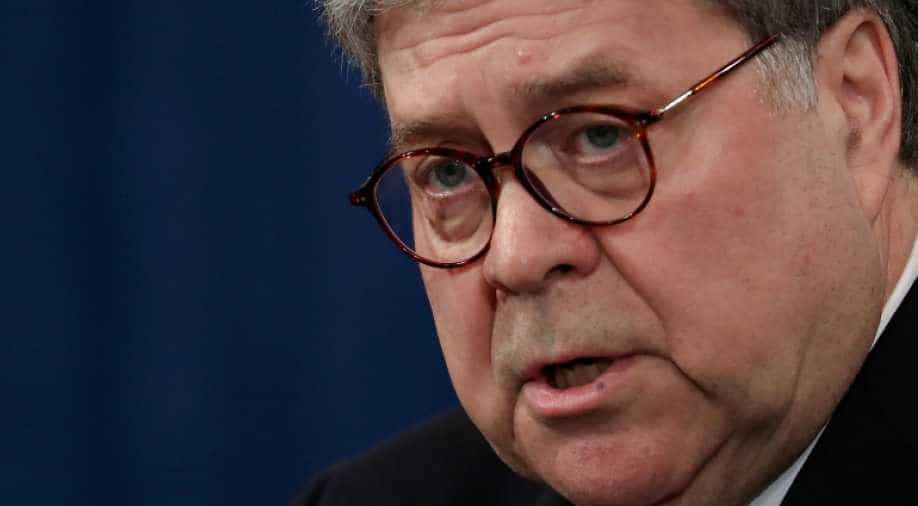 Democratic members of the committee accused Barr of skewing the truth and deliberately downplaying disturbing behaviour by the president, even if it did not add up to a crime.

US Attorney General Bill Barr rejected allegations in a Senate hearing Wednesday that he had whitewashed the Mueller Russian interference report to protect President Donald Trump, but then refused to appear before the House to answer similar questions.

Barr underwent tough questioning in the Senate Judiciary Committee over his decision last month to declare that Trump had been fully cleared by Special Counsel Robert Mueller's investigation -- a move which Mueller himself objected to days later in a letter.

Democratic members of the committee accused Barr of skewing the truth and deliberately downplaying disturbing behavior by the president, even if it did not add up to a crime.

But Barr rejected the criticisms, saying that after Mueller submitted his final report, it was his "baby" and his prerogative as head of the Department of Justice to sum up its conclusions.

Barr refuses to testify to House

After more than four hours before the Senate panel, Barr was scheduled to testify before the House Judiciary Committee on Thursday, where he likely faced more rigorous questioning, including by a committee lawyer.

But late Wednesday the Justice Department announced he wouldn't appear, and would also not turn over to Committee Chairman Jerry Nadler a complete, unredacted version of the Mueller report.

"Unfortunately, even after the Attorney General volunteered to testify, Chairman Nadler placed conditions on the House Judiciary Committee hearing that are unprecedented and unnecessary," said department spokeswoman Kerri Kupec.

"Chairman Nadler's insistence on having staff question the Attorney General, a Senate-confirmed Cabinet member, is inappropriate."

Democrats are debating whether Trump should be impeached for obstruction of justice based on the evidence set out in Mueller's 448-page report into Russian interference in the 2016 election.

Ahead of its release, on March 24 Barr announced that the report found no evidence of crimes of conspiracy with the Russians and inadequate evidence to support obstruction charges.

Barr's summary allowed Trump to declare "complete and total exoneration" over accusations of conspiracy with Russia and obstruction of justice, and to claim that it proved the Mueller probe was a politicized "witch hunt."

But the full report released on April 18 painted an altogether more damaging picture of the president's conduct.

Mueller said his team did not find evidence that Trump's campaign criminally conspired with Russians, but the report detailed repeated efforts by the Trump team to engage with Russians and to benefit from the sabotage.

Mueller also laid out a damning pattern of obstructive behavior by the president and suggested Congress itself should investigate. But he declined to give his own opinion on whether Trump had committed a crime.

Explaining his summary, Barr said it would have been "irresponsible and unfair" to release the report without reaching a conclusion, and he had attempted to "notify the people of the bottom-line conclusion."

'It was my decision'

But Barr's stance drew more criticism after the release Wednesday of a previously unknown March 27 letter in which Mueller criticized Barr's four-page summary of the report.

Mueller complained that Barr "did not fully capture the context, nature, and substance" of his conclusions, and had generated "public confusion."

The letter also made clear that at least twice in March Mueller proposed that Barr release the investigation's own summaries first, and that Barr had ignored that idea to put out his own version.

In testy exchanges with Democrats, Barr branded Mueller's letter as "a bit snitty" and "probably written by one of his staff people."

"It was my decision how and when to make it public, not Bob Mueller's," he said of the report.

Corey Booker assailed Barr for not criticizing the behavior of Trump and his campaign documented by Mueller even if it did not rise up to a crime.

"You seem to be excusing a campaign that had hundreds of contacts with a foreign adversary," Booker said.

"Your conduct seems to be trying to normalize that behavior."

Kamala Harris alleged that Barr had conflicts of interest that should have prevented his involvement in the investigation.

"You used every advantage of your office to create the impression that the president was cleared of misconduct," she said.

US plans sales of top-end fighter jets to UAE: Lawmaker