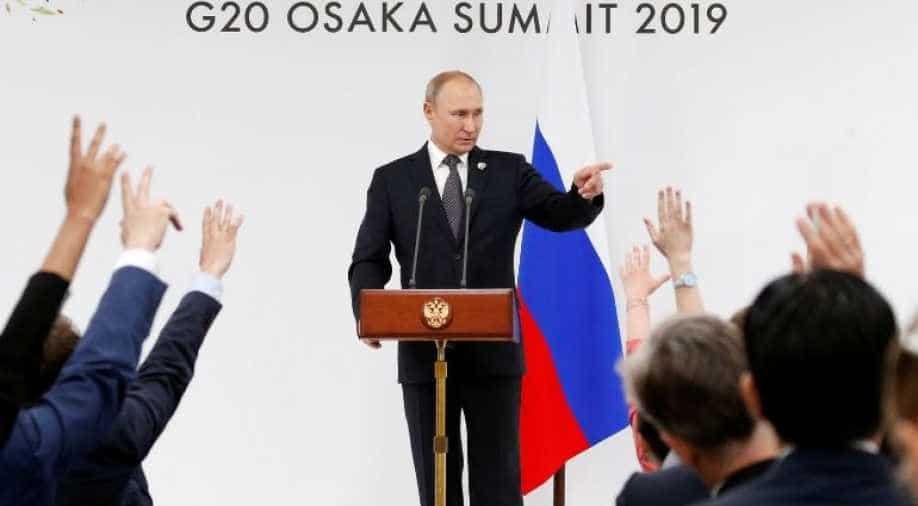 They were dismayed at the leading role non-OPEC Russia, once seen as the group's rival in oil markets, was playing in shaping the group's policies.

When Vladimir Putin announced at the weekend that OPEC would extend oil production cuts, broadcasting a deal before the group had even met to approve it, the move angered some member nations.

They were dismayed at the leading role non-OPEC Russia, once seen as the group's rival in oil markets, was playing in shaping the group's policies.

But reality soon set in, and the acceptance that Moscow could help OPEC in its goal of propping up oil prices at a time when it is facing intensifying heat on another front: from US President Donald Trump.

Trump is putting unprecedented pressure on OPEC and its de-facto leader Saudi Arabia, demanding they pump more crude to drive down fuel prices - a key domestic issue for him as he seeks re-election next year.

"OPEC is going to die with these processes," he declared on Monday morning before OPEC oil ministers met to effectively rubber-stamp a done deal, bemoaning the Russia-Saudi dominance of the group's affairs.

But by Monday evening, he had thrown his support behind the deal: "The meeting was good for Iran and we achieved what we wanted."

OPEC and Russia have become unlikely bedfellows, forging an "OPEC+" alliance to reduce global crude supply to counter soaring output from the United States and a weakening world economy.

It is a marriage of convenience as both want higher oil prices to shore up their finances, while the alliance could also strengthen OPEC's position in the face of Trump's demands.

"Russia is a big player. If it announced something in agreement with the rest of OPEC, this is most welcome," he said. "We are working together."

Iraq, which has overtaken Iran as OPEC's second-largest producer after Saudi Arabia and has taken its market share in Europe and Asia, also said Moscow's rising role was positive.

Such a chorus of approval is a sharp reversal for relations between OPEC and Russia that have been characterised by antipathy and distrust for decades.

Back in 2001, Russia agreed to cut production in tandem with OPEC but never delivered on its pledges and instead raised output. That severely damaged relations and other attempts at cooperation were unsuccessful - until the recent alliance.

In his book "Out of the Desert", former Saudi Oil Minister Ali al Naimi wrote that his 2014 meeting with Russian officials lasted just minutes. Upon learning Russia would not cut output, he gathered his papers and said: "I think the meeting is over."

Putin announced on Saturday that he had met Saudi Crown Prince Mohammed bin Salman on the sidelines of a G20 meeting in Osaka and they had agreed to extend the OPEC+ production cuts.

Gary Ross, chief executive of Black Gold Investors, said that even if it was "indelicate" for Saudi Arabia to let Putin announce the deal, it showed the changing oil market dynamics.

"Trump has one interest – low oil prices. Putin wants higher prices," said Ross, a veteran OPEC watcher. "Putin is vitally important for OPEC. And it is still in Russia's best interest to cooperate with OPEC as half its budget comes from energy revenues."

Russia needs prices of $45-50 a barrel to balance its budget and its finances are stretched by U.S. sanctions imposed following its annexation of Crimea. Saudi Arabia needs an even higher price of $80. Benchmark Brent crude is currently in the region of $65 a barrel.

But just as the collaboration could lend Saudi Arabia some support against Trump, who has demanded Riyadh increase oil supply if it wants U.S. military support in its standoff with regional rival Iran, it also gives Putin more than extra revenues.

Good relations with Riyadh, an American ally, bolsters Moscow's clout in the Middle East, helps Putin's campaign in Syria and might even help mend relations with Washington, according to two sources in Russia's delegation to Vienna, where OPEC officials have been meeting.

Iran's change in tone, in particular, illustrates the conflicting political and economic pressures it faces.

Tehran's falling production, due to U.S. sanctions reimposed and extended by Trump, has reduced its role within OPEC while increasing those of Saudi Arabia and non-OPEC Russia.

Iran's exports plummeted to 0.3 million barrels per day in June from as much as 2.5 million bpd in April 2018. Oil output in OPEC's exempt nations

But Iran is itself also looking to help from Russia, one of just a few countries that have offered to aid Tehran to counter the sanctions choking its oil trade and hammering its economy.

Two Russian energy industry sources said some work was being done to boost the Iranian economy but talks were slow and difficult, without giving details of the nature of the plans.