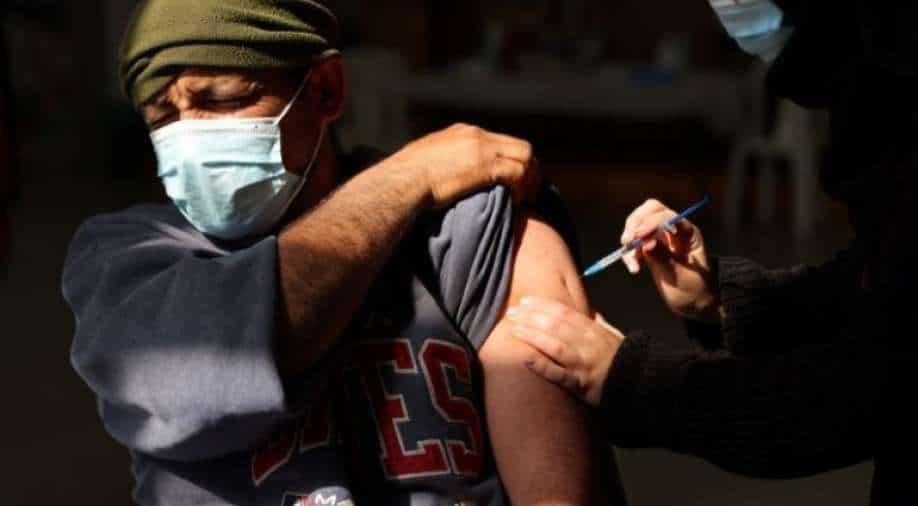 A Palestinian labourer who works within Israel or its settlements in the occupied West Bank, is vaccinated at an Israeli facility at Shaar Efraim crossing from Israel to the West Bank, March 8, 2021(File Photo). Photograph:( Reuters )

The Pfizer-BioNTech doses earmarked for transfer 'will expire soon', the statement said, and they were 'approved in light of the fact that Israel's vaccine stock meets its needs today'

Israel will send at least 1 million soon-to-expire COVID-19 vaccine doses to the Palestinian Authority (PA) under a deal to share shots, after being urged to do more to ensure Palestinian access to vaccinations as it inoculated its own citizens at world-leading speed.

Under the terms of the deal, first announced on Friday by the office of new Israeli Prime Minister Naftali Bennett, the PA agreed to give Israel a reciprocal number of Pfizer-BioNTech doses from one of its own shipments due to arrive later this year.

Also read | Opinion: For just cause of Palestine

Confirming the agreement, the PA health ministry said in a statement it was Pfizer that initially offered the exchange and that "it was approved in order to speed up the vaccination process" in the occupied West Bank and Gaza.

Rights groups have criticised Israel for not doing more to ensure Palestinian access to doses in territory it captured in a 1967 war.

Israeli officials have argued that under the Oslo peace accords, the PA health ministry is responsible for vaccinating people in Gaza and parts of the West Bank where it has limited self-rule.

Criticising the dose-sharing deal, Physicians for Human Rights Israel said on Twitter: "It is highly doubtful that the PA will be able to use all the vaccines, as they are about to expire."

Israel's initiative of loaning the PA vaccines is too little too late. It does not fulfill Israel's obligation of vaccinating all Palestinians living under its jurisdiction. It is highly doubtful that the PA will be able to use all the vaccines, as they are about to expire.

The deal was among initial policy moves towards the Palestinians by Bennett, who was sworn in on Sunday and replaced veteran leader Benjamin Netanyahu.

"Israel will transfer to the Palestinian Authority 1-1.4 million doses of the Pfizer vaccine," a joint statement from Bennett's office and the health and defence ministries said.

The Pfizer-BioNTech doses earmarked for transfer "will expire soon", the statement said, and they were "approved in light of the fact that Israel's vaccine stock meets its needs today". The statement did not give its exact expiration date.

An initial 100,000 doses were transferred on Friday, Israeli officials said.

A PA health ministry source said the Palestinians expect to receive a shipment of Pfizer doses in August or September. The Israeli statement said Israel would receive reciprocal doses from the PA in September or October.

Around 55 per cent of eligible Israelis are fully vaccinated - a coverage rate largely unchanged by this month's expansion of eligibility to include 12 to 15-year-olds.

Some 30 per cent of eligible Palestinians in the West Bank and Gaza, home to a combined 5.2 million people, have received at least one vaccine dose, according to Palestinian officials.

According to a poll released on Tuesday by the Palestinian Center for Policy and Survey Research, 40 per cent of Palestinians are willing to take the vaccine once it is available, while 35 per cent say they and their families are not willing to get vaccinated.

The Palestinians have received vaccine doses from Israel, Russia, China, the United Arab Emirates and the global COVAX vaccine-sharing initiative.