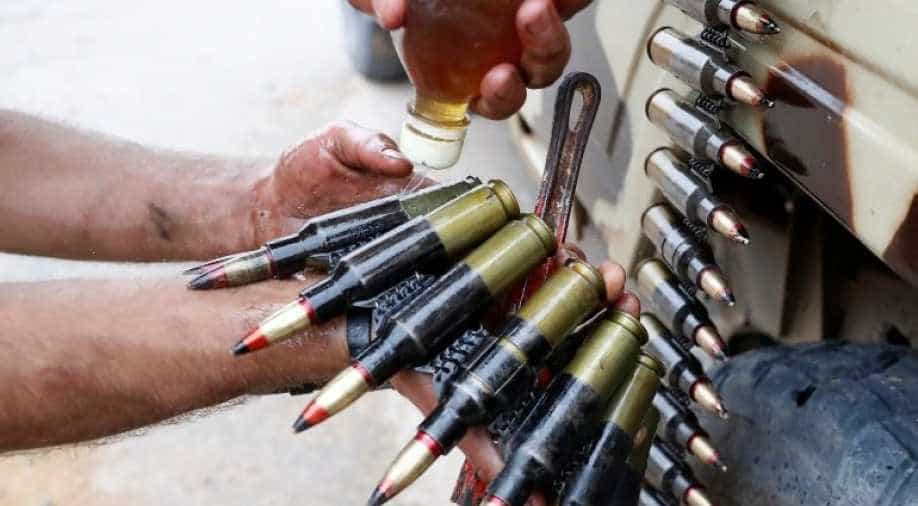 File Photo: A fighter loyal to Libya's UN-backed government (GNA) oils bullets during clashes with forces loyal to Khalifa Haftar on the outskirts of Tripoli, Libya May 25, 2019. Photograph:( Reuters )

The arms embargo, which is implemented by a European Union (EU) force, will remain in effect until June 2020.

The United Nations Security Council (UNSC) on Monday unanimously extended the ban on the flow of weapons to Libya for another one year, even as infighting between rebel commander Khalifa Haftar's forces and UN-backed government shows no signs of abating in the strife-torn North African nation.

The arms embargo, which is implemented by a European Union (EU) force, will remain in effect until June 2020. In 2016, UNSC had authorised EU's Operation Sophia, which was initially aimed at tackling human trafficking, to inspect ships in the Mediterranean Sea suspected of carrying weapons that could violate the arms embargo, Anadolu News Agency reported.

UN Secretary-General Antonio Guterres is to report to the UNSC within 11 months on the embargo's implement, according to a resolution adopted.

Haftar's Libyan National Army (LNA) has remained unsuccessful so far in capturing Libya's capital Tripoli from the UN-backed Government of National Accord (GNA) ever since fighting began in April.

However, the LNA has a sizeable presence in several areas around Tripoli.

Libya has been largely divided into two factions ever since the death of dictator Muammar Gaddafi in 2011. The LNA controls the eastern part of Libya, while the UN-backed GNA governs Libya's western region from Tripoli.

While the LNA is backed by Egypt and the United Arab Emirates (UAE), it has accused Turkey of supporting the GNA and its forces in Tripoli.

The international community has urged for a peaceful resolution to the intense fighting which has ensued in the African country.