UK has irrefutable evidence Russia behind attack on Skripal: Theresa May to Putin at G20 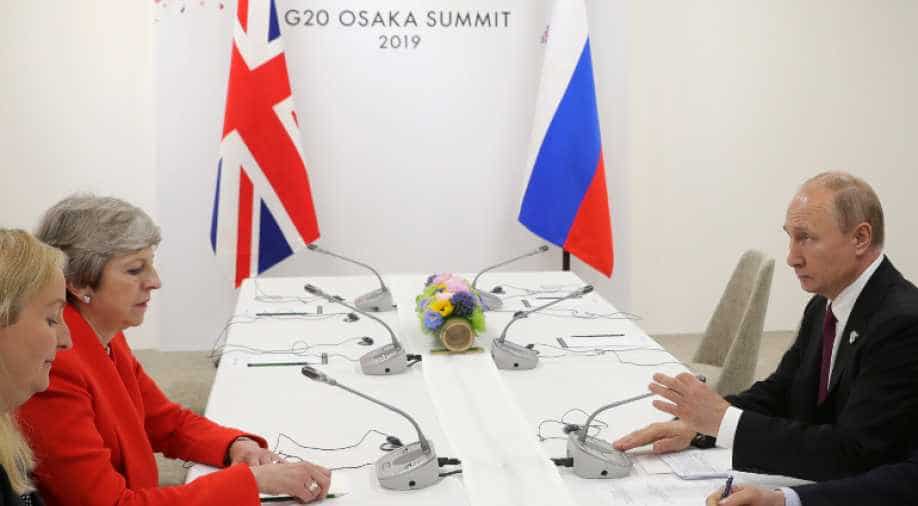 The comments came as May met Putin on the sidelines of the G20 summit in Japan's Osaka, their first formal face-to-face since the poisoning of former spy Sergei Skripal last year.

"She told the president that there cannot be a normalisation of our bilateral relationship until Russia stops the irresponsible and destabilising activity that threatens the UK and its allies -- including hostile interventions in other countries, disinformation and cyber attacks," the spokesperson said.

May also told Putin that Britain "has irrefutable evidence that Russia was behind the attack" on the former spy.

"The prime minister underlined that we remain open to a different relationship, but for that to happen the Russian government must choose a different path."

London has made clear that May's meeting with Putin does not represent a thawing of ties with Russia, despite calls from Putin for the two countries to "turn the page".

Putin's spokesman Dmitry Peskov said the Russian president and May first met one-on-one, accompanied only by their translators.

"In this format May spoke about the Skripal affair, she raised this issue and got necessary answers from the Russian president," Peskov told reporters on a conference call.

They later discussed trade and economic ties with members of their delegations, he said.

Peskov said "there is an understanding" of the need to revive bilateral economic cooperation "in the interests of the two countries' business."

The two leaders also discussed the Ukraine, Syria and Iran crises, he added.

Ties between Moscow and London have been severely strained since the March 2018 poisoning of the former Russian spy and double agent Skripal and his daughter Yulia in the English city of Salisbury.

The incident led to dozens of tit-for-tat diplomatic expulsions and a breakdown in already fragile relations between Moscow and London.

Russia has repeatedly denied any part in his killing.

Earlier this month, Putin said it was time to "turn the page" on the countries' difficult relationship after the poisoning.

"Global issues related to national interests in the economic and social spheres and global security are more important than games of security services," the Kremlin leader said at the time.

Skripal sold secrets to Britain and moved there after a 2010 spy swap.

Last year, he and his daughter were poisoned with a military-grade nerve agent, the first use of chemical weapons in Europe since World War II.

London says the attempted assassination was "almost certainly" approved by the Russian state.

The G20 will be one of May's last trips as prime minister as Britain awaits a new leader.

Former foreign minister and London mayor Boris Johnson is the favourite to succeed her in an election that will be decided in a vote by members of the ruling Conservative party.

The winner will be announced on July 23, and will formally take office the next day.

Putin has voiced hope relations could improve under a new PM.