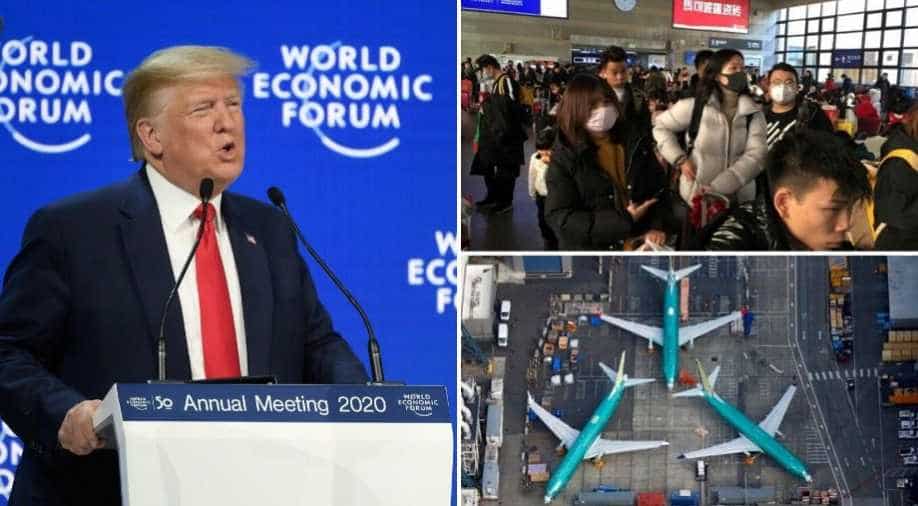 Here's a list of major world news of January 21.

US President Donald Trump said America has regained its stride and rediscovered its spirit at World Economic Forums at Davos, meanwhile the death toll in SARS-like coronovirus in China rose to six.

Here are the top world news of the Day.

US President Donald Trump during a special address at the World Economic Forum(WEF) in Davos said America had regained its stride and rediscovered its spirit. Read more. Read more

The death toll in the new China virus that is transmissible between humans rose to six, the mayor of Wuhan said in an interview with state broadcaster CCTV on Tuesday. Read more

Boeing Co is in talks with banks to facilitate a $10 billion loan or more as costs continue to rise, in the midst of two crashes involving the 737 Max jetliner, Reuters reported. Read more

UK's Maritime Minister Nusrat Ghani confirmed during a Tuesday Visit to Belfast that the world's most famous shipwreck, the RMS Titanic will be rigorously protected under an international agreement. The agreement will be restricting exploration of the sunken vessel's decaying hull. Read more

In a first, US Navy names aircraft carrier after an African-American war hero

US Navy will honour Doris Miller, an African American hero of World War II by naming a new aircraft carrier after him, the BBC reported.

This will be the first carrier to be named after an African American. Read more

The meeting between Pakistan and the Financial Action Task Force (FATF) begun in Beijing on Tuesday and according to reports, things might not be looking good for the country as it is heading to the meeting with a 400% surge in cases against eight globally banned organisations. Read more

Asian shares took a sudden turn for the worse on Tuesday as mounting concerns about a new strain of coronavirus in China sent a ripple of risk aversion through markets. Read more

The United States President Donald Trump yesterday rejected the impeachment charges against him and called for their immediate dismissal by the Senate, where the case is due very soon. Read more

Ten years after the Vatican took it over, the Legion of Christ religious order is in crisis again. This religious order in Mexico founded in 1941 was once powerful influential. But it now faces an existential crisis. Read more

Prince Harry was spending the first full day of his new life in Canada on Tuesday after jetting in from Britain to join his wife Meghan following their shock exit from their royal roles. Harry, 35, landed at Vancouver International Airport on a British Airways flight from London Heathrow shortly after 7:00 pm on Monday (0300 GMT Tuesday). Read more