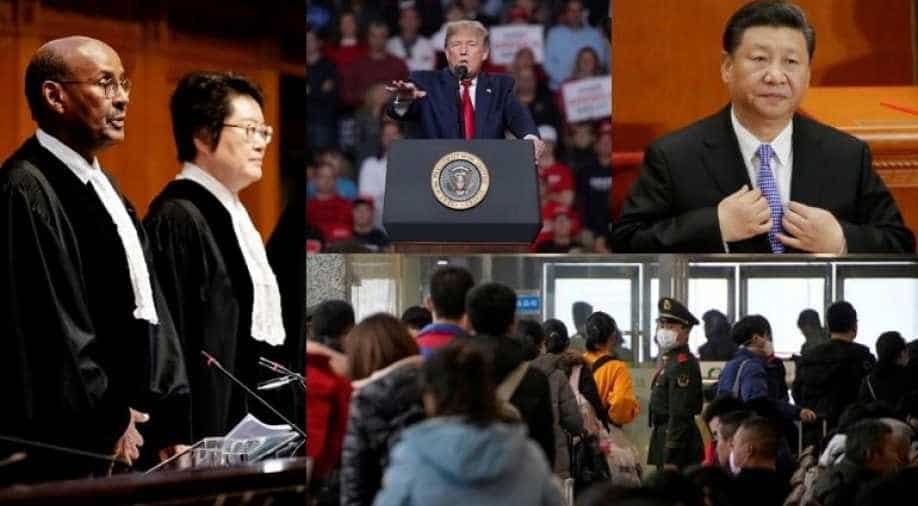 Here are the top world news of the day

Chinese authorities on Thursday lockdown two cities - Wuhan and Huanggang - as the SARS-like coronavirus continued to spread. Beijing went a step further to cancel the much-awaited Lunar New Year events to contain the spread of the virus even as more countries reported cases of the deadly coronavirus which has already claimed 17 lives in China.

Meanwhile, the International Court of Justice(ICJ) pronounced its verdict in the Rohingya genocide case ordering Myanmar to take "all measures within its powers" to prevent alleged genocide against Rohingyas. Gambia had filed a lawsuit at the ICJ last November requesting emergency measures to large scale atrocities reported against the Rohingyas.

After Wuhan, second Chinese city Huanggang was placed on lockdown as the SARS-like coronavirus continued to spread in China. The city authorities said train services to the city will be stopped from midnight and all vehicles would be checked. Read more

The incident took place after an argument outside a McDonald's restaurant snowballed into a firefight. Read more

Tai, a 21-year-old philosophy student was one of the first protesters to be arrested in Hong Kong. Five months later, he was charged with unlawful assembly, a crime that carries a sentence of up to three years in jail. Read more

The lawsuit, filed in the Southern District of New York on Wednesday, has also claimed that Hawaii Democrat Gabbard suffered an economic loss to be proven at trial. Read more

The patient was admitted to a unit in a hospital in Everett, Washington on Monday which specializes in treatment of pathogens. He was recently diagnosed with the virus in Seattle soon after he had returned from a trip to China. Read more

US Major General Alexus Grynkewich said the Islamic State "certainly still remain a threat" although he did not see the threat of an immediate IS comeback. Read more

According to new research published in the New England Journal of Medicine, the volcanic eruption of Mount Vesuvius in A.D. 79 was so catastrophic that no remains were found in the form of flesh and blood. Read more