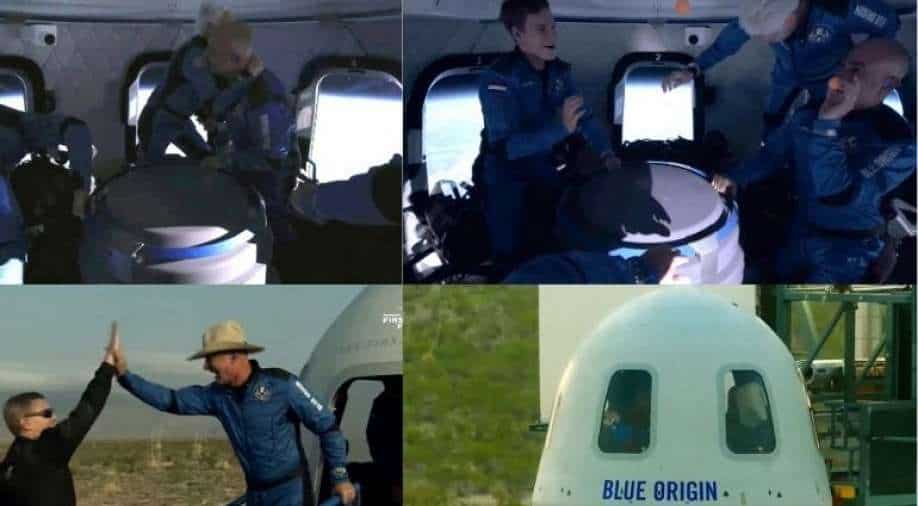 Amazon founder roared it was his "best day ever" as the capsule landed back on Earth carrying crew members Wally Funk, Oliver Daemen and Mark, brother of Jeff Bezos.

Amazon founder Jeff Bezos who landed on Earth after a historic space flight aboard Blue Origin's New Shepard rocket said the Earth is a "tiny little fragile thing, and as we move about the planet we're damaging it."

"Every astronaut who's been up into space, they say that it changes them ... they look at it and they're kind of amazed and awestruck by the Earth and its beauty, but also by its fragility, and I can vouch for that," Bezos said after his capsule landed safely completing a 10 miniute and 20 second stay in space.

Wally Funk, 82, who became the oldest woman to enter space, said: "We had a great time, it was wonderful."

The crew comprising of Bezos and his brother Mark including Dutch teen Oliver Daemen and Wally Funk enjoyed the zero-gravity experience.

"Best day ever," Bezos said as the capsule touched down on Earth. When asked if he was ready for another round, Bezos replied excitedly, saying: "Hell yes, how fast can we refuel that thing? Let's go."

The crew carried with them pieces of history comprising of fabric from the Wright brothers' first plane. a bronze medallion made from the first hot air balloon flight in 1783, and goggles belonging Amelia Earhart.