Theresa May woos Turkey for trade, presses on human rights 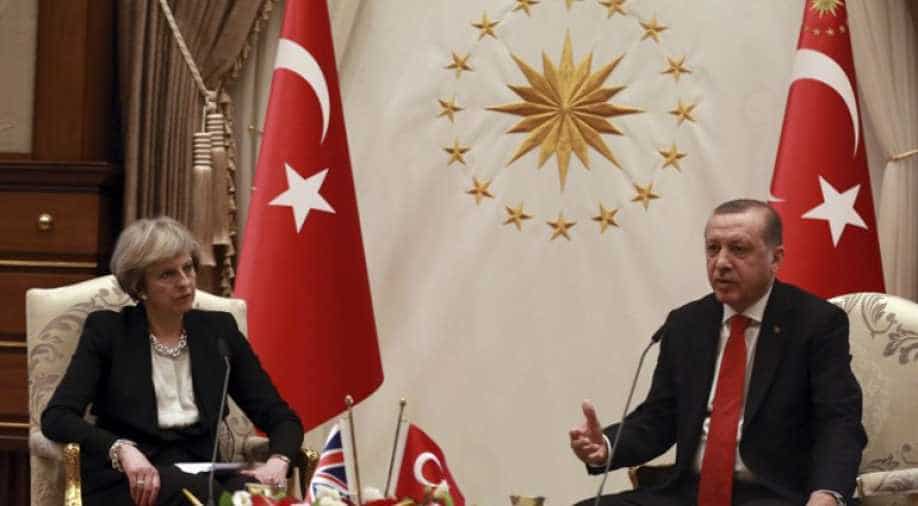 Theresa May held three hours of talks with Turkey's President Erdogan, her first visit to the country since she became premier. Photograph:( AFP )

British Prime Minister Theresa May on Saturday promised steps to ramp up trade between Turkey and Britain ahead of Brexit but also urged Ankara to uphold human rights following a failed coup.

On her first visit to Turkey as premier and fresh from meeting new US President Donald Trump at the White House, May held three hours of talks with President Recep Tayyip Erdogan.

May sought to strike a delicate balance between showing Britain's keen interest in expanding trade with Turkey following the June vote to leave the European Union while echoing European alarm over the scale of the crackdown after the July 15 attempted coup.

May announced the creation of a joint group to boost trade ahead of Britain's departure from the EU and also oversaw the signing of a deal for Britain's BAE Systems to develop a new Turkish fighter jet.

May said after meeting Erdogan at his palace she was "proud" Britain had stood with Turkey's democratically-elected government when the coup struck.

But she added: "Now it is important that Turkey sustains that democracy by maintaining the rule of law and upholding its international human rights obligations, as the government has undertaken to do."

May stressed that Turkey was one of Britain's "oldest friends" with relations going back over 400 years, referring to the establishment of relations between the Ottoman Empire and England under Elizabeth I.

Earlier, a spokeswoman countered criticism from some MPs that Britain was cosying up to Turkey while turning a blind eye to its human rights record.

The spokeswoman said: "I don't think there are any issues that the prime minister is afraid to bring up."

Around 43,000 people are under arrest on charges of links to the coup bid, which Ankara blames on the US-based preacher Fethullah Gulen. He denies the charges.

May's visit is also seen as the first to Ankara by a major Western leader since the attempted putsch, although then US vice president Joe Biden held talks with Erdogan in August.

Her visit came hours after Erdogan had hosted the American actress Lindsay Lohan -- a keen supporter of Erdogan's vision of a multipolar world -- in his vast presidential palace in Ankara.

Erdogan said the two sides were targeting increasing annual trade from over $15 billion to $20 billion.

Meanwhile, May said Britain and Turkey have agreed to set up a working group to "prepare the ground for our post-Brexit trading relationship" after Britain leaves the European Union.

"We both want to build on our existing links and I believe that doing so will be to the benefit of both of our countries and for the prosperity of both our nations," she said.

Under a non-binding agreement, BAE Systems and state-owned Turkish Aerospace Industries (TAI) will establish a partnership for the development of the TF-X fighter jet.

May said it indicated that "Britain is a great, global, trading nation and that we are open for business", after the Brexit vote.

She added that "it marks the start of a new and deeper trading relationship with Turkey."

The initial phase is worth over 100 million pounds (117 million euros), Downing Street said.

But the agreement can pave the way for further deals potentially worth billions of pounds over a 20-year lifespan, May's spokeswoman told reporters.

Back in the UK, some MPs have urged May not to let her focus on trade overshadow human rights concerns over the crackdown in Turkey.

"The Conservative Brexit government is so desperate for trade deals with anyone but the mature democracies of the European Union that even the most unsavoury rulers are to be subjected to the prime ministerial charm," opposition Liberal Democrat MP Sarah Olney wrote in the Guardian newspaper.

Erdogan and May also discussed the battle against jihadists in Syria and efforts to reunify Cyprus, where both Ankara and London are guarantor powers, as well as aviation security.

"I am pleased with the steps we have taken and I believe in the continuation of this success in the future," Erdogan said after the talks.