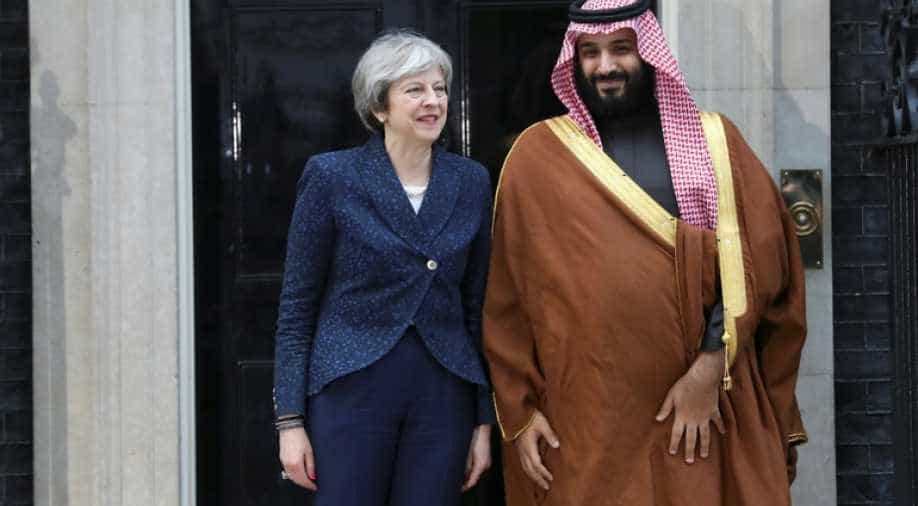 A fiery exchange in parliament between May and opposition leader Jeremy Corbyn underlined tension in Britain over Prince Mohammed's trip, which was aimed at building a broader economic partnership between the two countries, but has sparked anger about alleged human rights abuses and the war in Yemen.

"The link that we have with Saudi Arabia is historic, it is an important one, and it has saved the lives of potentially hundreds of people in this country," May said, pausing her answer briefly as opposition lawmakers cried "Shame!". She was alluding to intelligence-sharing on Islamist militant suspects.

The debate took place as Prince Mohammed lunched with the British monarch on the first leg of a trip packed with displays of diplomatic affection designed to help widen long-standing defence ties into a more far-reaching partnership.

Britain is looking for trading partners as it exits the European Union, and energy powerhouse Saudi Arabia needs to convince sceptical investors about its domestic reforms.

"This is a significant boost for UK prosperity and a clear demonstration of the strong international confidence in our economy as we prepare to leave the European Union," a spokeswoman from May's office said after the meeting.

But demonstrators gathered outside May's office amid a heavy police presence to protest at both countries' role in Yemen, where war has killed around 10,000 people. A Saudi-led coalition intervened militarily in Yemen in 2015 and critics say Riyadh has been using British-supplied weapons in devastating strikes.

"I don't believe that someone like Mohammed bin Salman should be welcomed in Britain," said Hassan Yassine, a 25-year-old customer service worker from London. "It is definitely not ethical, bearing in mind what is going on in Yemen every single day, every single second, even as we speak."

Corbyn said British military advisers were "directing the war" in Yemen. May's spokesman said British personnel had no role in carrying out coalition air strikes, and were not involved in Saudi targeting decisions.

Police said a man was arrested on suspicion of criminal damage after an egg was thrown at a police vehicle as bin Salman's motorcade arrived in Downing Street.

Wednesday's first official engagement was a trip to Buckingham Palace to see Queen Elizabeth - a rare honour usually reserved for heads of state.

The Saudi delegation then met May at her offices to launch a UK-Saudi Strategic Partnership Council.

The meeting set out the mutual trade and investment target, which would include direct investment in Britain and new Saudi public procurement with British companies. This would be spread across sectors including finance, education, healthcare, renewable energy and defence, May's office said.

Britain is vying to land the stock market listing of state oil firm Saudi Aramco, but no decision is expected this week.

"We would like the Aramco share option to be issued in the United Kingdom and we will continue to suggest the City would be the best place for it," junior foreign office minister Alistair Burt told parliament.

Later this month Prince Mohammed visits the United States, which also wants the lucrative listing, although sources said both countries might miss out.

British officials were privately delighted at the decision by Prince Mohammed, 32, to choose Britain as the major Western destination on his first foreign trip since becoming heir to the Saudi throne last year.

The British government is keen to develop a two-way trade and investment relationship, eyeing both an expanded market in Saudi Arabia for service sector exports, and attracting Saudi cash to finance domestic projects.

For his part, Saudi Arabia's ambitious heir wants to show that "shock" reforms have made his country a better place to invest and a more tolerant society.

Business deals are possible with British defence group BAE Systems and European weapons maker MBDA, and initial agreements could be concluded on gas exploration, petrochemicals and other industries, according to British and Saudi sources.

The three-day visit will include a second Royal audience - dinner with the Prince Charles and Prince William on Wednesday - and a prestigious visit to May's country residence on Thursday.

The prime minister intends to use the private dinner at Chequers, a 16th-century manor house 40 miles (60 km) northwest of London, to further press her concerns over the humanitarian crisis in Yemen, her spokesman said.

The Saudi-led coalition is fighting the Iran-allied Houthi movement in Yemen in a campaign to restore its internationally recognised government, generating what the United Nations said in January is the world's worst humanitarian crisis.

Demonstrators are protesting against Britain for licensing 4.6 billion pounds of weapons sales to Saudi Arabia since 2015.

May said all arms sales were strictly regulated, that Saudi Arabia's involvement in the conflict was backed by the UN Security Council and her government supported it.

"The prime minister and crown prince agreed on the importance of full and unfettered humanitarian and commercial access, including through the ports, and that a political solution was ultimately the only way to end the conflict and humanitarian suffering in Yemen," the statement from May's office said.