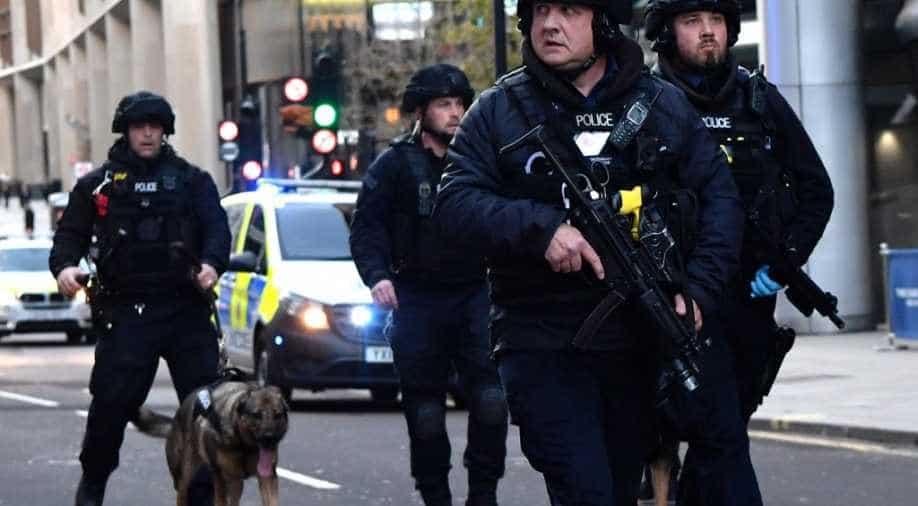 The prime minister revealed around 74 people with terrorist convictions had been released early from prison in a similar way to Usman Kan, who left jail last December and went on to stab two people to death in Friday's rampage.

Britain's Boris Johnson said Sunday the security services were stepping up monitoring of convicted terrorists released early from prison, as the London Bridge attack became embroiled in the election campaign.

The prime minister revealed around 74 people with terrorist convictions had been released early from prison in a similar way to Usman Kan, who left jail last December and went on to stab two people to death in Friday's rampage.

"They are being properly invigilated to make sure there is no threat," Johnson told the BBC in an interview.

"We've taken a lot of action as you can imagine in the last 48 hours," he said, adding he would not provide "operation details".

Khan, 28, was shot dead while wearing a fake explosives vest by police on London Bridge after a stabbing spree that also injured three people launched at a nearby prisoner rehabilitation event he was attending.

Members of the public were hailed as heroes for preventing even greater loss of life by tackling him -- one armed with a five-foot (1.5-metre) narwhal tusk and another with a fire extinguisher.

The incident comes two years after Islamist extremists in a van ploughed into pedestrians on the bridge before attacking people at random with knives, killing eight people and wounding 48.

Police, who on Saturday searched two properties in central England believed to be linked to Khan, have said they believe he was acting alone and are not seeking anybody else.

But the Islamic State group has released a statement claiming responsibility for the attack.

Khan, a British national, had been handed an indeterminate sentence for the protection of the public in 2012, with at least eight years in prison.

He was part of an eight-man network inspired by Al-Qaeda who had plotted to bomb targets including the London Stock Exchange, and planned to take part in "terrorist training" in Pakistan.

But his sentence was quashed by the Court of Appeal in April 2013 and he received a new 21-year term, comprising a custodial sentence of 16 years and five years on conditional release.

He had then been conditionally released from jail last December under so-called licensing conditions after serving around half of his jail term.

Khan has become a contentious political issue ahead of Britain's December 12 election, with Johnson blaming the previous Labour government for changing the law in 2008 to allow for the early release of prisoners.

The Tory leader has vowed that if he reclaims power this month he will end early release for terrorist offences and introduce minimum 14-year sentences, with some convicted never to be released.

The proposals were not in the Conservatives' formal manifesto released last Sunday.

Johnson penned an article setting out the new stance in The Mail on Sunday newspaper, under the headline: "Give me a majority and I'll keep you safe from terror".

Critics have hit out fiercely at him for appearing to politicise Friday's attack -- including the father of the first-named victim.

David Merritt confirmed on Twitter the death of his son Jack Merritt, a course coordinator at the Cambridge University's criminology institute which was hosting the event targeted by Khan.

He described his 25-year-old son as "a beautiful spirit who always took the side of the underdog", in a series of messages that also responded to the political furore around the attack.

"It's not lenient policies that are to blame, it's the destruction of the probation service that is supposed to monitor and supervise prisoners after release, & rehabilitation services," he added.

"Since 2010 these service(s) have been cut to the bone. We are all less safe as a result."

Meanwhile, Johnson's political opponents noted his Conservative Party has been in power for nearly a decade but had chosen not to tighten the laws around terrorism sentencing.

They have also argued changes to sentencing laws introduced in the 1990s under the Conservatives also contributed to the early release system.

"I think there has to be an examination of how our prison services work and crucially what happens to them on release from prison," Labour leader Jeremy Corbyn told Sky News.

He would not commit to ending early release in all scenarios for terrorism offences.