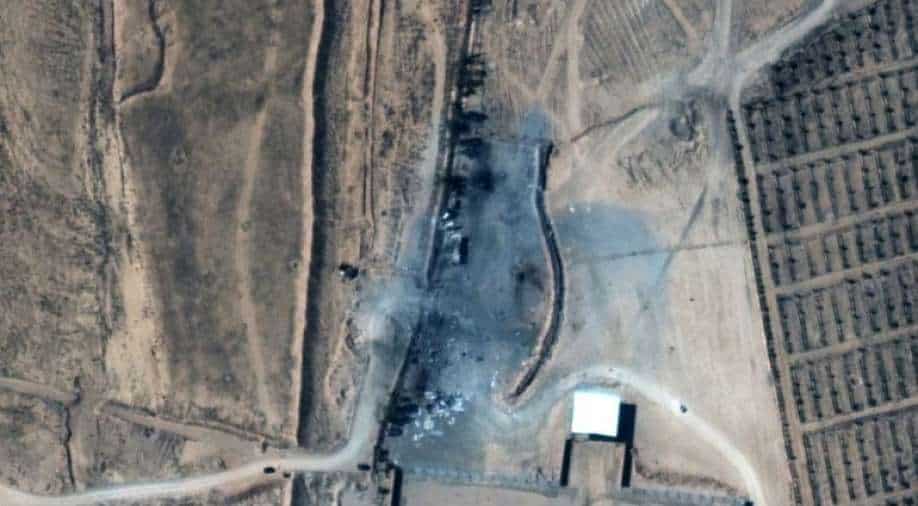 A close up view of destroyed buildings at an Iraq-Syria border crossing after airstrikes, seen in this February 26, 2021 handout satellite image provided by Maxar Photograph:( Reuters )

The airstrikes, early on Friday local time, targeted militia sites on the Syrian side of the Iraqi-Syrian frontier, where groups backed by Iran control an important crossing for weapons, personnel and goods

Syria on Saturday slammed US airstrikes against Iranian-backed militias in the east of the country on Friday as a ''cowardly act'' and urged President Joe Biden not to follow "the law of the jungle".

"Syria condemns in the strongest terms the cowardly US attack on areas in Deir al-Zor near the Syrian-Iraqi border," the Syrian Foreign Ministry said in a statement.

"It (the Biden administration) is supposed to stick to international legitimacy, not to the law of the jungle as (did) the previous administration."

Iranian Foreign Ministry spokesman Saeed Khatibzadeh condemned the US strikes, calling them "illegal aggression" and a violation of human rights and international law.

"You can't act with impunity. Be careful," Biden told reporters in Texas when asked what message he was sending Iran with the strikes.

The airstrikes, early on Friday local time, targeted militia sites on the Syrian side of the Iraqi-Syrian frontier, where groups backed by Iran control an important crossing for weapons, personnel and goods.

Pentagon spokesman John Kirby said two F-15E "Strike Eagles" dropped seven precision-guided munitions on Thursday on facilities in eastern Syria used by the militias believed to be behind a spate of rocket attacks on US troops in Iraq.

Western officials and some Iraqi officials accuse Iranian-backed groups of involvement in deadly rocket attacks on US sites and personnel in Iraq over the last month.

Russia, an ally of Syrian President Bashar al-Assad, also criticised the US strikes and called for "unconditional respect of the sovereignty and territorial integrity of Syria."

White House spokeswoman Jen Psaki said the airstrikes in Syria were meant to send the message that Biden will act to protect Americans.

"He's going to act to protect Americans and when threats are posed, he has the right to take an action at the time and in the manner of his choosing," Psaki said.

Secretary of State Antony Blinken said the administration wanted to make it "very, very clear -- notably to Iran-- that they cannot act with impunity against our people, our partners, our interests.