Shopping bag that dissolves in water in 3 min: Chilean innovator's bid to save oceans 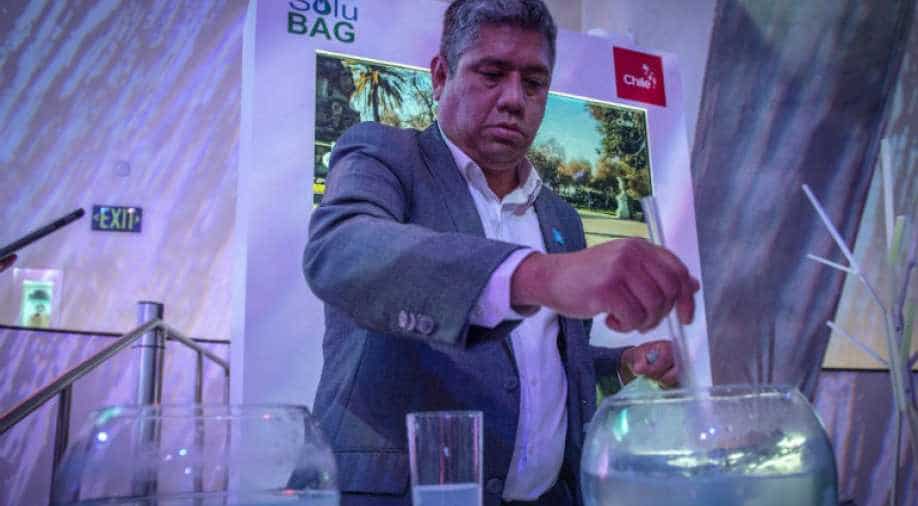 Patricio Cabezas submerges a plastic shopping bag in water and three minutes later it has completely dissolved but, not content with that, afterwards he drinks the water before members of the public attending a Miami event showcasing Chile's innovative talent, in this case focusing on saving the oceans.

Cabezas - one of the five partners in Solubag, the firm that this year won the prize for the best innovation in Latin America awarded by Singularity University, a Silicon Valley think-tank that partners with Google and other tech firms - was in Miami on Tuesday to participate in the ProChile Innovative Summit along with representatives from 24 other Chilean companies.

The ideas and items the firms are offering are many and varied, demonstrating that minerals, wines, fruit and salmon - products for which Chile is well-known around the world - are not the only areas where the South American country is gaining clout, as Chilean Foreign Minister Roberto Ampuero said at the inauguration of the event.

Another firm showcasing its products and ideas is Levita Magnetics, which is developing innovative magnetic surgical platforms to enable doctors to perform less invasive laparoscopic surgery, thus reducing patients' pain and recovery time after their operations.

The huge artificial lagoons of Crystal Lagoon, the first fighting videogame created in Latin America by the AOne company, an app that allows users to get 360-degree views Chile's attractions and the Motion Displays platform that enables store owners to show distant customers products as if they were standing right in the store are some of the other attractions at the fair.

Solubag's aim, more so than earning money, is to reduce pollution in the oceans, Cabezas - an engineer like his partners who worked for Chile's biggest plastics manufacturer before joining the firm - said.

"First I helped to create the problem and now I'm solving it," he said with a smile.

One of Solubag's grocery bags dissolves in just three minutes when submerged in water, although normally it takes 500 years for most plastics to disintegrate, Cabezas said, adding that he came to Miami seeking contracts and attempting to raise capital and participation in the firm founded in 2014.

The raw material used in manufacturing the bags - polyvinyl alcohol (PVA) - is the same substance used in pharmaceutical capsules, he said, emphasising that it is "harmless," meaning that it does not contaminate the water in which it dissolves.

The best proof of this claim is that Cabezas and his partners - Roberto Astete, Alejandro Castro, Christian Olivares and Salvador Matte - are in good health, despite having drunk many glasses of water containing dissolved bags at events like the one in Miami.

The bags are just as strong as regular plastic grocery bags, holding 5 kg (11 pounds) of items, and - although they presently cost three times what commonly used bags cost - Cabezas said that the price will decline as more stores begin using them.