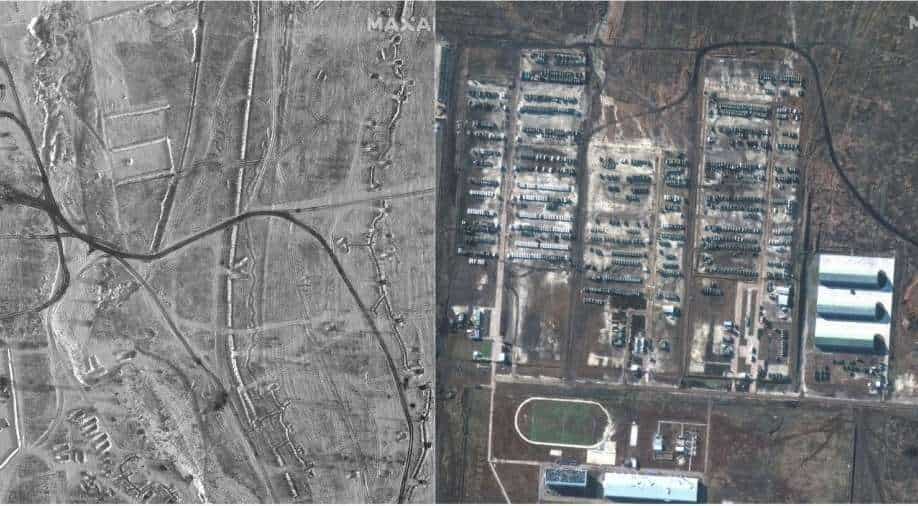 As of December 13, there were hundreds of vehicles and tanks at the base. An image of the same base in October showed the base half empty

New satellite images show that Russia is still building up forces in Crimea and near Ukraine, reports Reuters. However, the agency claims that it could not independently verify the latest images from  Maxar technologies.

The images show a base in Crimea, which Russia annexed in 2014. As of December 13, there were hundreds of vehicles and tanks at the base. An image of the same base in October showed the base half empty.

Maxar, in a statement, said, "Over the past month, our high-resolution satellite imagery has observed a number of new Russian deployments in Crimea as well as in several training areas in western Russia along the periphery of the Ukraine border."

Other Maxar images showed a build-up at the Soloti staging ground in Russia close to the Ukrainian border, with photos shot at the start of December showing a larger concentration of military hardware than in September.

Several other pictures showed a continuing build-up at Yelnya, which is 160 miles north of the Ukrainian border. There was also a build-up at the Pogonovo training ground near the southern Russian city of Voronezh.

Tensions between Russia and Ukraine escalated in mid-November after Washington warned of a massive Russian troop build-up on Ukraine's border. NATO chief Jens Stoltenberg had offered to start talks with Russian officials year next year without setting a date to discuss the situation in Ukraine.

While speaking to AFP, he said that Moscow's invasion could destabilise Ukraine.