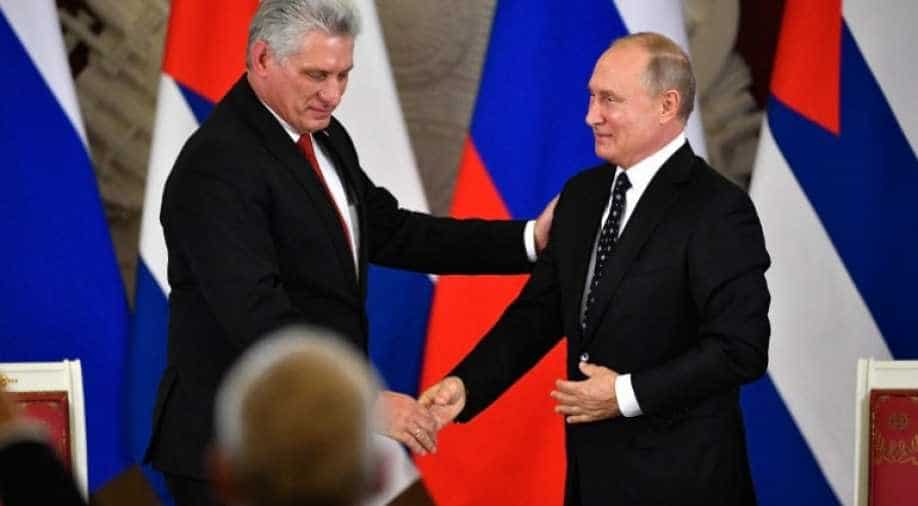 His trip came a day after the United States, which has slapped several rounds of sanctions on Russia, imposed new economic restrictions on Cuba.

Diaz-Canel took office in April in a historic transition of power on the Caribbean island, succeeding Raul Castro, who took over from his elder brother Fidel, father of the 1959 revolution.

In a brief joint statement after their meeting in the Kremlin, Putin praised "friendship, mutual support and help" which mark the two countries' relations through the decades, and said the two leaders had "substantive and effective talks".

Diaz-Canel invited Putin to visit Cuba in 2019 and said he would assure the continuity of the "legacy" of the relations between Moscow and Havana built since the Soviet period.

Diaz-Canel flew into Moscow on Thursday for a three-day visit accompanied by Foreign Minister Bruno Rodriguez and other officials.

In his meeting with parliament speaker Vyacheslav Volodin, Diaz-Canel blasted the new US sanctions and said relations with Washington have taken a nosedive under President Donald Trump.

"Relations between Cuba and the US are regressing," he was quoted by Interfax news agency is saying.

"They are returning to Cold War rhetoric," he said, calling reports of sonic attacks on US diplomats in Havana "lies".

Kremlin spokesman Dmitry Peskov stressed the warmth of "friendship and cooperation with Cuba", telling journalists on Thursday: "Russia intends to continue these relations and do everything possible to develop them."

Military cooperation would also be on the agenda, Peskov said, adding that the topic was "quite sensitive" and he could not give details.

He declined to comment on a report in the Kommersant daily that Moscow would lend Havana more than $50 million to buy Russian arms.

Moscow had funnelled massive funds into Cuba since the 1960s, when it proclaimed that the island has become a socialist republic after the Cuban Revolution.

Cuba's proximity to Moscow's Cold War rival the United States had historically made it an important ally that bore geopolitical significance, culminating in the 1962 Cuban missile crisis which put Moscow and Washington on the brink of nuclear war.

It also served as an unusual -- and symbolic -- meeting place between Russian Orthodox Patriarch Kirill and Pope Francis in 2016.

Stepping up military cooperation with Cuba would be viewed by Washington with great unease as Russian-American relations have plunged to the lowest level since the Cold War.

Russian Deputy Prime Minister Yury Borisov during a recent visit to Cuba oversaw signing of contracts worth over $260 million, though it was not clear how many of them dealt with the military sphere.

State newspaper Rossiiskaya Gazeta proclaimed this a "Return to Cuba".

Borisov told Russian journalists that the issue of Moscow's military aid to the Cuban army would be discussed later this month when the Cuban defence minister visits Russia.

Diaz-Canel will later meet Prime Minister Dmitry Medvedev and the head of the Russian Orthodox Church, Patriarch Kirill, who held a landmark meeting with Pope Francis in Cuba in 2016.

Previous Cuban president Raul Castro visited Russia in 2015 while Putin visited the island on a tour of Latin America in 2014, meeting both Raul and Fidel Castro.