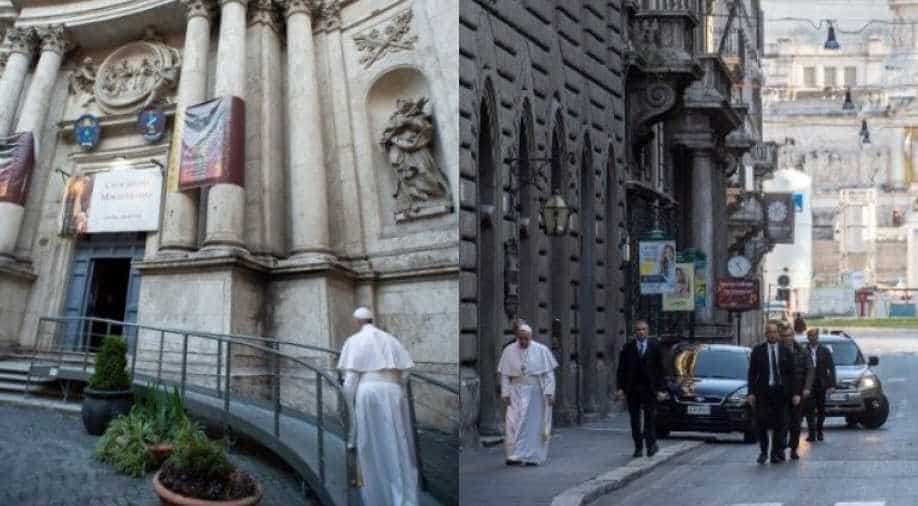 Pope Francis walks in a deserted Rome to pray at two shrines for the end of the coronavirus pandemic, in Rome, Italy March 15, 2020.  Photograph:( AFP )

A Vatican statement said he prayed for an end to the pandemic and also for the sick, their families and health providers and workers keeping pharmacies and food stories open amid a national lockdown.

Pope Francis on Sunday ventured into a deserted street of Rome to pray in two shrines for the end of coronavirus pandemic even as the Vatican said that Easter services will held without the public for the first time, reported news agency Reuters.

Francis stepped out of Vatican unannounced to pray at the Basilica of Santa Maria Maggiore.

The Pope then walked along one of Rome's main streets to visit St. Marcello church to pray before a crucifix that was used in a procession when the plague hit Rome in 1522, the report added.

A Vatican statement said he prayed for an end to the pandemic and also for the sick, their families and health providers and workers keeping pharmacies and food stories open amid a national lockdown.

A Vatican picture showed the pope and a small security detail walking on an empty Via del Corso, which is usually packed with shoppers and people taking strolls on Sunday.

The Vatican said earlier that his Holy Weeks and Easter services next month will be held without public participation, a step believed to be unprecedented in modern times.

It was not clear how the massive events will be scaled down but sources said officials were studying ways to hold them in indoor locations, including St. Peter's Basilica and the Sistine Chapel, with small representative groups attending.

The Holy Week services, which begin on Palm Sunday, leading to Easter, the most important day of the Roman Catholic liturgical calendar for the world's 1.3 billion members.

Palm Sunday, which commemorates Jesus' entry to Jerusalem, usually takes place in St. Peter's Square, which traditionally is decorated with olive trees while those in the crowd hold up palm branches.

Another Holy Week event, the Way of the Cross procession on Good Friday, takes place around Rome's ancient Colosseum.