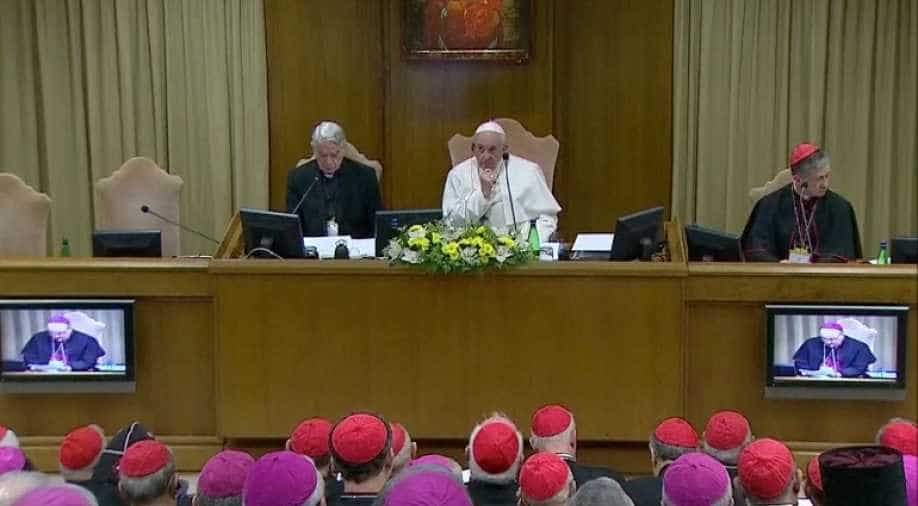 Maltese Archbishop Charles Scicluna, one of the summit's organisers, described the proposals as 'a roadmap for the future development of policy', and said they 'govern all aspects of getting it right'.

"As a help, I would share with you some important criteria formulated by the various episcopal commissions and conferences -- they came from you and I have organised them somewhat," he said as the meeting began.

"They are guidelines to assist in our reflection. They are a simple point of departure that came from you and now return to you. They are not meant to detract from the creativity needed in this meeting," he added.

The Vatican has said any concrete changes will come post-summit when it will "identify the proposals that resulted from the meeting and the tasks that need to be accomplished, so that the proposals are transformed into actual practice".

Maltese Archbishop Charles Scicluna, one of the summit's organisers, described the proposals as "a roadmap for the future development of policy", and said they "govern all aspects of getting it right".

Here are some of the guidelines, some of which may already be in place in some countries, but not others:

- Draw up mandatory codes of conduct for all clerics,  service personnel and volunteers, to determine appropriate boundaries in personal relationships. And check their criminal record.

- Flag up the dangers of abuse and its effects, how to recognise signs of abuse and how to report suspected sexual abuse, all in collaboration with parents, teachers, professionals and civil authorities.

- Make it easy for victims to report abuse to an independent body separate from the local church authority.

- Draw up a practical guide which specifies the steps to be taken at key moments when a case emerges.

- Implement common procedures for investigating claims and protecting victims and the rights to defence of those accused.

- Inform civil and church authorities in line with civil and canonical law.

- Periodically revise protocols and rules to ensure a protected environment for minors in all pastoral structures.

- Protection and care for victims.

- Increase awareness of the causes and consequences of abuse through ongoing training of all clerics and religious workers.

- Include lay experts in investigations and canonical trials into sexual abuse or abuse of power.

- Protect the right of presumption of innocence, not publishing the names of the accused until a final verdict is reached.

- Rule that priests and bishops found guilty of the sexual abuse of children be stripped of their ministries.

- Draw up rules on the transfer of priests or student priests from one diocese or seminary to another.