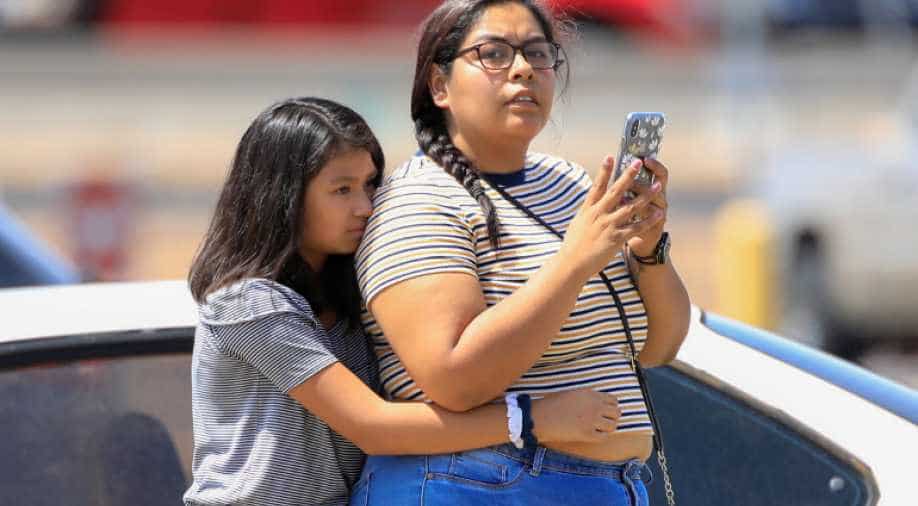 A girl reacts at the nearby Cielo Vista Mall after a mass shooting at a Walmart in El Paso, Texas, US August 3, 2019. Photograph:( Reuters )

A 21-year-old white male suspect from Allen, a suburb of Dallas, surrendered to police outside the store after the rampage that left 20 people dead and 26 wounded

Texas authorities are investigating the Saturday mass shooting at a Walmart store in El Paso as a possible hate crime, the city's police chief said, as authorities study an online manifesto linked to the suspect.

A 21-year-old from Allen, a suburb of Dallas, surrendered to police outside the store after the rampage that left 20 people dead and 26 wounded.

US media identified him as Patrick Crusius, who is white, and linked him to a "manifesto" posted online that includes passages railing against the "Hispanic invasion" of Texas.

"Right now we have a manifesto from this individual that indicates to some degree he has a nexus to potential hate crime," El Paso Police Chief Greg Allen said at a news conference.

Veronica Escobar, who represents El Paso in Congress, said "the manifesto narrative is fueled by hate."

"And it's fueled by racism and bigotry and division," she added, speaking at a press conference with El Paso Mayor Dee Margo and Texas Governor Greg Abbott.

"El Paso has historically been a very safe community. We have been safe for decades. We will continue to be safe."

"This is someone who came from outside our community to do us harm. A community that has shown nothing but generosity and kindness to the least among us. Those people arriving at America's front door," she said.

El Paso, a nine-hour drive from the Dallas area, lies on the Rio Grande River that marks the US border with Mexico.

It has a population of 680,000, of which 83 per cent are of Hispanic descent, according to US census figures.

The city averaged 18 murders a year over the past five years and has a significantly lower violent crime rate than similar-sized US cities.

In recent months, El Paso has also become one of the busiest entry points for undocumented migrants, especially from Central America, seeking asylum in the United States.

On weekends, the city attracts droves of shoppers from Mexico, including from its Mexican sister city Ciudad Juarez, population 1.5 million.

Three of those killed on Saturday came from Mexico, President Andres Manuel Lopez Obrador tweeted. And there are six Mexicans among the wounded, the country's foreign minister Marcelo Ebrard said.

Crusius wrote that the attack "is a response to the Hispanic invasion of Texas," and made references to the Christchurch shootings in New Zealand, where a white gunman killed 51 mosque worshippers in March.

Crusius claimed that he was "defending" his country "from cultural and ethnic replacement brought on by an invasion."

He also complained that the AK-47 rifle that he chose was "not designed to shoot rounds quickly, so it overheats massively after about 100 shots are fired in quick succession."

To counter this, he said he'd wear a heat-resistant glove.

Crusius wrote that he probably spent less than a month preparing for the shooting. "I have to do this before I lose my nerve," he noted.

Oddly, the document includes a rant against automation and corporate America.

"The inconvenient truth is that our leaders, both Democrat AND Republican, have been failing us for decades," the document read.

He then describes his death as "likely inevitable."

"If I'm not killed by the police, then I'll probably be gunned down by one of the invaders.

"Capture in this case is far worse than dying during the shooting because I'll get the death penalty anyway," he wrote.

El Paso police said there was no exchange of gunfire when Crusius was detained.

CNN said the "manifesto" was posted to 8chan, a no-censorship site where other extremist manifestos have appeared.