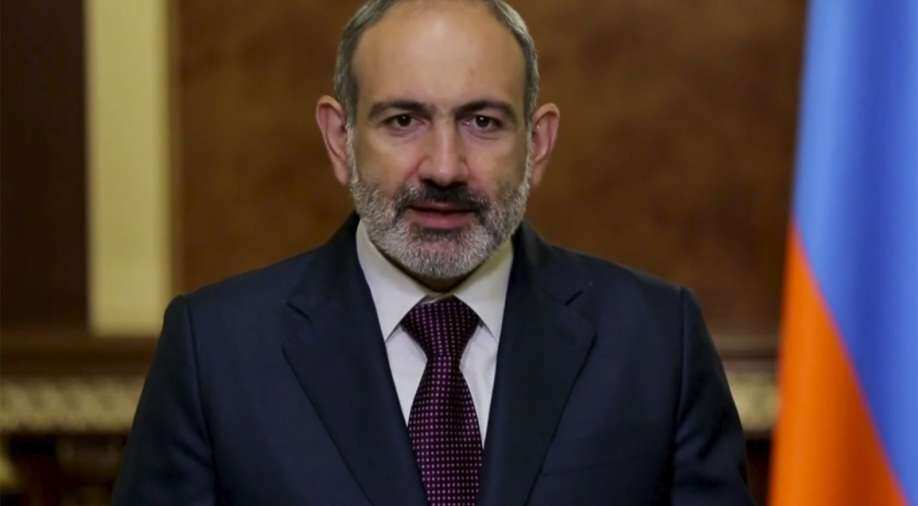 Azerbaijan and ethnic Armenian forces have been clashing in several parts of Nagorno-Karabakh, since September 27 -- despite two major Russia-brokered ceasefires. At least 750 people have been killed since fighting began.

Armenian Prime Minister Nikol Pashinyan Saturday said Pakistan had a role to play in the war raging across the Nagorno-Karabakh region.

Azerbaijan and ethnic Armenian forces have been clashing in several parts of Nagorno-Karabakh, since September 27 -- despite two major Russia-brokered ceasefires. At least 750 people have been killed since the fighting began.

Pashinyan, in an exclusive conversation with WION, said, "We have information that armed fighters from Pakistan are participating in the war raging in the Karabakh region. We can see that Turkey is also involved in the war -- mercenaries are being brought to the conflict zone by Ankara. It is a chaotic, confusing situation that we are seeing in Karabakh."

"And perhaps, the multi-layered nature of this war is the one reason we cannot achieve peace."

Pashinyan said this was a war that was imposed on Armenia, adding "we are hence left with no choice but to use all possible means to defend ourselves, until a diplomatic solution is achieved."

The prime minister said that Armenia had so far honoured the truce that was called on between them. But it was Azerbaijan that broke it.

"Armenia has honoured the ceasefire commitment. It is Azerbaijan that has failed to honour the ceasefire," he said, adding, "in these cases, nobody says 'yes, I was the one who broke the truce.' But that the war was started by Azerbaijan is a fact. And then there is the fact that Azerbaijan has armed terrorists fighting on its side. You cannot have armed men on your side and ask for truce. And thirdly, Turkey has been siding with them, and asking them to not stop the fighting. So we can build this logical chain and guess who is breaking the truce."

International efforts have been on to end the deadliest fighting in the enclave in more than a quarter of a century. But no peace has so far been achieved.

"To achieve a solution, mutual concessions are required. But every time Armenia mentions or proposes a concession, Azerbaijan comes with a new demands and new conditions. This has been a case for a long time. Azerbaijan is not ready for any solution based on mutual concessions. As soon as it is ready, we will have a solution to the problem. We shall continue to work in that direction," Pashinyan told WION.

The Armenian prime minister looked a little apprehensive about the kind of role the international organisations have been playing -- particularly, NATO.

"Turkey is a member of NATO, and this, in a way, puts a little responsibility of the war on NATO too. An international human rights watch recently stated that Azerbaijan is using prohibited ammunition -- which is a grave violation of international laws. But when a member of the NATO is transporting terrorists and mercenaries to the conflict zone, then NATO has direct responsibility. NATO must answer these questions," he said, adding, "what is happening in Karabakh is an extension to Turkey's genocide of the Armenians. They have been doing this since the time of the Ottoman Empire."

When asked about the corroboration of his claims, Pashinyan said, "This war has become an extension to the joint Turkey-Azerbaijan military exercise that they began in August. Turkey is not even concealing its involvement in the conflict. Its highest officials have said they support Azerbaijan in the war. Azeri forces are using Turkish military equipment. And they are sending mercenaries to the Azerbaijan. All this serves as a proof."

Pashinyan said that Armenia would fight till the end "but I really hope the diplomatic efforts fall in place, and a solution is arrived onto."

Meanwhile, new clashes broke out Saturday between Azerbaijan and ethnic Armenian forces over Nagorno-Karabakh a day after talks in Washington.

US Secretary of State Mike Pompeo had met separately with the foreign ministers of Azerbaijan and Armenia on Friday in a new attempt to end nearly a month of bloodshed that Russian President Vladimir Putin said may have killed 5,000 people.

The collapse of two Russia-brokered ceasefires had already dimmed the prospect of a quick end to fighting that broke out on September 27 over Nagorno-Karabakh.