Obamacare, in its first big test as safety net, is holding up so far 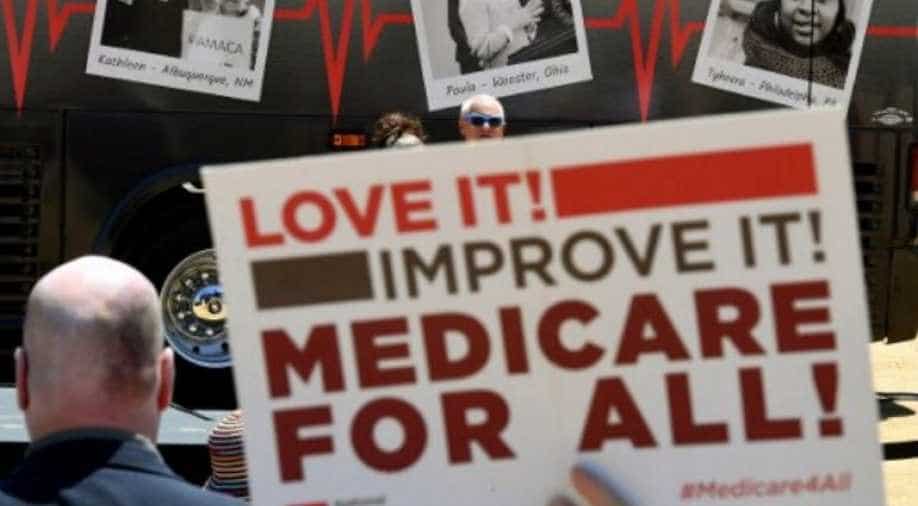 Since the coronavirus pandemic set off job losses this spring, enrollment in both programs has been growing. Experts say sign-ups would probably be higher still if not for Trump administration moves that included slashing the ACA’s advertising budget and declining to have an additional sign-up period when the pandemic hit

In past recessions, the uninsured rate would surge. Now, for the first time, Americans are experiencing a recession with the Affordable Care Act in place.

The health law’s expansion of Medicaid and its offer of subsidized health plans have provided a new safety net for those who have lost their jobs and their health insurance.

The Affordable Care Act gave states the option to cover poor residents through Medicaid, and it offered tax credits to help low- and middle-income Americans buy health insurance. Since the coronavirus pandemic set off job losses this spring, enrollment in both programs has been growing. Experts say sign-ups would probably be higher still if not for Trump administration moves that included slashing the ACA’s advertising budget and declining to have an additional sign-up period when the pandemic hit.

State Medicaid enrollment, according to one report, had an 11% increase from February to September in the 36 states that have released data. Another paper, from Manatt Health, shows those gains concentrated in states that have participated in the health law’s Medicaid expansion, with an enrollment growth rate of 22.2% between February and November.

Sign-ups for plans in marketplaces run by the federal government are up 6.6% compared with last year, according to a new federal tally. It is the only year during the Trump administration when enrollment increased, and amounts to a half-million more people seeking coverage from the federal marketplace. The total is still down compared with 2016, the last year the Obama administration was running the program.

Final government estimates of the uninsured rate are months away, but at least one survey, from the research group the Commonwealth Fund, shows the share of Americans without coverage was holding steady through the spring. The Affordable Care Act is a crucial reason for that.

“We’ve seen both the important security that it provides and a lot of the remaining holes in the safety net cast into stark relief in this twin crisis of dire health need and economic recession,” said Kate Baicker, dean of the Harris School of Public Policy at the University of Chicago.

Charts based on an analysis of census data by Matt Bruenig, president of the People’s Policy Project, show how the overall health insurance landscape has changed since the Affordable Care Act took effect. In 2009, 16.7% of Americans lacked health insurance, and, for those of working age, the poorer you were, the more likely you were to fall in that category.

Medicaid enrollment among low-income Americans has since surged, particularly in states that expanded their programs, reducing the disparities. Enrollment in subsidized private coverage has also grown among those earning slightly more. As the population has aged, more people have also become eligible for another public program: Medicare. The 2020 chart shows survey results collected early in the year, so these numbers do not reflect the impact of the COVID recession. (There have been slight changes in census methodology in the intervening years, but they should not skew the patterns in a major way.)

Bruenig said he was struck by how many low-income people remained uninsured, a sign, he said, that the new system was not yet reaching everyone it was designed to help.

“There’s a lot of uninsurance at the bottom, more than you might think,” he said. “Because for one reason or another, people are not getting on these plans.”

Addressing the growing need for health insurance during an economic downturn was a priority for the Affordable Care Act’s architects, who wrote the legislation as the country dug out of the Great Recession.

“Unemployment was a major concern,” said John McDonough, a Harvard professor who served as an adviser during the law’s drafting. “The whole point was to create an option primarily for working people who might find themselves unemployed, or worked for an employer who didn’t offer coverage that was affordable.”

While data is still coming, there are early signs that the Affordable Care Act is making health coverage less dependent on employment.

In a paper published in October, Dr. Benjamin Sommers and Dr. Sumit Agarwal looked at what happened to the health insurance status of Americans who lost a job. Before the Affordable Care Act, these newly unemployed workers experienced a 4.6-percentage-point increase in their uninsured rate.

After the law took effect, the association between job loss and higher uninsured rates disappeared.

“When someone lost a job, we saw the same big drop in employer coverage, but it was completely counterbalanced by gains in Medicaid and the marketplace,” said Sommers, a researcher and physician at Harvard.

Early, incomplete evidence suggests the law is serving that function during the coronavirus economic downturn. A federal report last month showed an increase in marketplace sign-ups this spring as the unemployment rate mounted. Between January and May, Healthcare.gov had about 150,000 more enrollments than usual.

A recent analysis of insurance industry data by Kaiser Family Foundation researchers found that roughly 2 million to 3 million Americans lost their job-based coverage between March and September. During the same period, around 5 million enrolled in Medicaid.

“When the economy suffers, the Affordable Care Act plays an important role in making sure people can still maintain insurance coverage in ways that didn’t exist before,” said Cynthia Cox, a vice president at the foundation. But Cox said that, even with this cushion, millions of Americans remain uninsured amid a public health crisis. Many of those people, she said, are eligible for free coverage, a sign that the programs are not reaching everyone they could.

Also read| Obama asked officials about the existence of aliens as US president. What did they tell him?

Cox also noted that fewer workers have lost job-based coverage than in past downturns. That may be because the workers most affected by this recession never got their coverage at work. Or perhaps more employers are trying to keep workers covered during this emergency, even as they face fiscal stress.

There are other ways that the Affordable Care Act is showing weak spots as a safety net program. While most Americans who buy coverage through the marketplace get a significant subsidy, they may still struggle to pay any share of a premium during this economic downturn.

“COVID has created more people who potentially can enroll, but those are the exact same people who have household budgets that are incredibly tight right now,” said Joshua Peck, co-founder of Get America Covered. “These are the people who are deferring mortgage payments. Adding health insurance is a pretty big challenge.”

Affordable Care Act programs can be hard to navigate, potentially discouraging even those who qualify for substantial financial help. Establishing eligibility often requires income checks and other paperwork. Annual ACA sign-up periods are typically limited to six weeks in most states. People who lose a job are eligible for a brief special enrollment period, but not everyone knows that. Besides cutting advertising, the Trump administration also cut the budget for outreach and for help picking a plan.

In California, which has invested heavily in advertising and outreach, and has offered more opportunities for the newly uninsured to sign up, enrollment in Medicaid and marketplace coverage is even higher, hinting at what the programs’ enrollment numbers might look like if the federal government were working harder to connect people with new coverage options.

“You can’t be a safety net, but then be asleep at the switch, and say we won’t do anything,” said Peter Lee, who runs California’s insurance marketplace, Covered California. That marketplace opened for sign-ups this spring and summer, and increased its marketing budget to help people learn about their options. Hundreds of thousands of people enrolled during those months, he said. Enrollment continues for 2021 plans.

Besides catching patients who have lost job-based coverage, the Affordable Care Act has aided doctors and hospitals, who saw their revenue plummet early in the pandemic as patients deferred and delayed medical care. Having more Americans with health coverage means more dollars flowing to those health providers.

“They’re receiving revenue for many patients who otherwise would have been uninsured,” said Cindy Mann, a partner at Manatt Health who previously ran Medicaid for the Obama administration. “That’s helped sustain them in a challenging environment.”