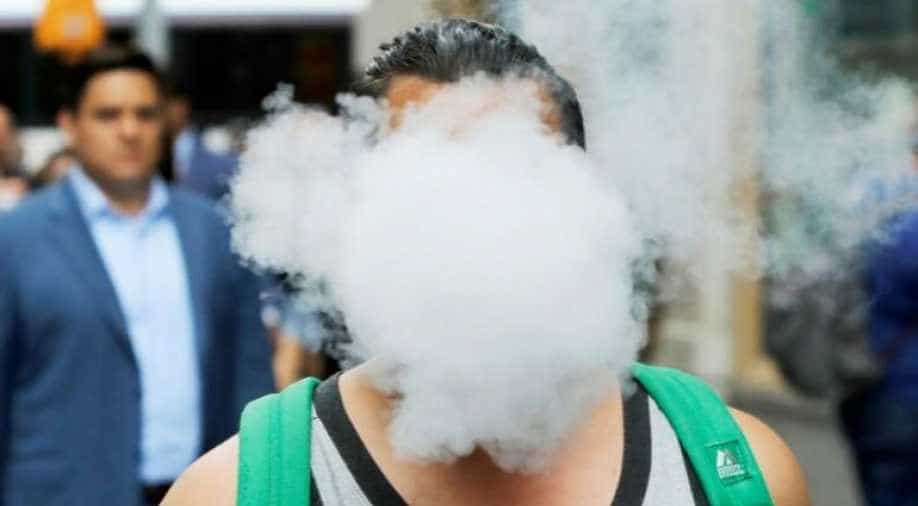 A man uses a vape as he walks on Broadway in New York City, US.  Photograph:( Reuters )

A New York court on Thursday temporarily halted a state ban on the sale of flavoured e-cigarettes.

A New York court on Thursday temporarily halted a state ban on the sale of flavoured e-cigarettes, giving the embattled vaping industry a breather just a day before the state's prohibition was due to take effect.

The appellate court ruling puts a hold on the ban that was announced by New York state's Democratic Governor Andrew Cuomo last month in response to widespread growing concern about the rising use of e-cigarettes among teens and a nationwide spate of lung illnesses.

The ban, which was due to start on Friday, will remain on ice until at least October 18 when the Supreme Court in Albany is scheduled to hear the case brought by industry trade group Vapor Technology Association arguing for a preliminary injunction on the ban.

"We are very pleased with the New York State Appellate Division's decision, which acknowledges the strength of our claims about the State's executive overreach, and which preserves the ability of hundreds of small businesses to remain open and continue to serve their adult customers," Tony Abboud, executive director of the association said in an emailed statement.

"Make no mistake: this is a public health emergency that demands immediate action to help ensure the wellbeing of our children, and we're confident that once the court hears our argument they will agree," Zucker said in a statement.

A handful of states have imposed or are eyeing similar bans as the crisis grows and the US Centers for Disease Control and Prevention recommends people stop using vaping products.

Governors in Michigan and Rhode Island have announced sales restrictions, while Massachusetts imposed an outright ban for four months while it examined potential new regulations. Ohio's state governor this week urged lawmakers to pass a ban.

US health officials earlier on Thursday reported 18 deaths due to a mysterious lung illness linked to e-cigarettes and other vaping products and said the number of confirmed and probable cases of the condition now exceeds 1,000.

The US Federal Trade Commission also on Thursday ordered several e-cigarette companies, including Juul Labs Inc and Nu Mark, to turn over sales and advertising data, in the first sign of a likely probe of their marketing practices. Tobacco giant Altria Group Inc owns Nu-Mark and has a 35 per cent stake in Juul.

Abboud noted that New York state lawmakers had already raised the minimum age for the purchase of vapour products from 18 to 21 from November and imposed a tax increase.

He said the lobby group was ready to work with officials "to achieve the twin goals of restricting youth vaping, which already is illegal, and preserving flavoured alternatives for adults desperately trying to quit smoking."

The New York State Department of Health had pledged to provide retailers with a two-week grace period before conducting site visits to enforce the ban on all flavoured e-cigarettes besides tobacco and menthol.