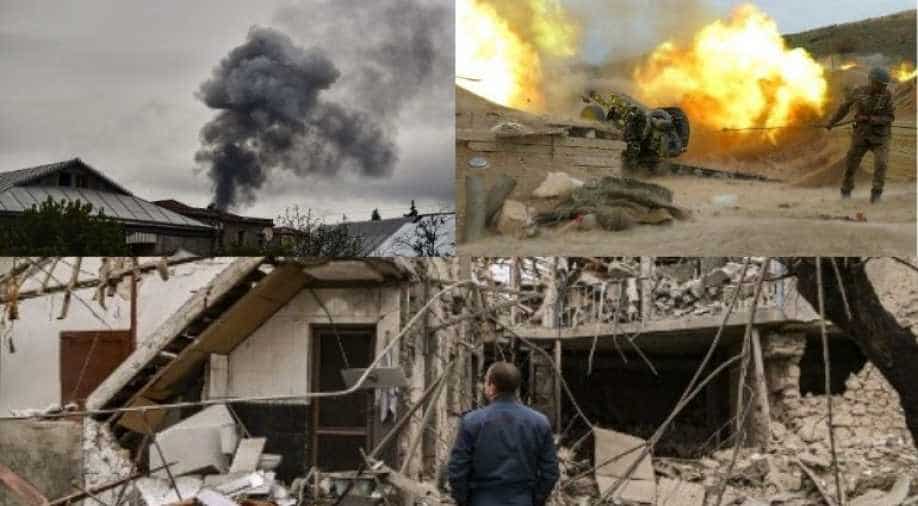 The collapse of two Russia-brokered ceasefires has dimmed hopes of a quick end to fighting that broke out on September 27 over Nagorno-Karabakh, a breakaway territory that is within Azerbaijan but is controlled by ethnic Armenians.

Hopes of ending nearly a month of bloodshed in the mountain enclave of Nagorno-Karabakh look slim as Azeri and ethnic Armenian forces fought new battles on the eve of talks in Washington.

Russian President Vladimir Putin said Moscow believed that nearly 5,000 people had been killed in fighting between Azerbaijan and ethnic Armenian forces over the Nagorno-Karabakh region.

"There are a lot of casualties on both sides, more than 2,000 on each side," Putin told a meeting of the Valdai Discussion Club.

Putin added that he speaks to leaders of Armenia and Azerbaijan several times a day by phone in order to reach a settlement. But those hopes have been dented by the continued heavy fighting in and around Nagorno-Karabakh, a breakaway territory that is inside Azerbaijan but controlled by ethnic Armenians, and by angry rhetoric from both sides.

Nagorno-Karabakh said 874 of its military personnel had been killed since Sept. 27, in addition to 37 civilians. Azerbaijan says 61 Azeri civilians have been killed and 291 wounded but has not disclosed its military casualties.

The collapse of two Russia-brokered ceasefires has dimmed hopes of a quick end to fighting that broke out on September 27 over Nagorno-Karabakh, a breakaway territory that is within Azerbaijan but is controlled by ethnic Armenians.

Shortly before the Washington talks were due to start, Turkish President Tayyip Erdogan told reporters in Istanbul that he hoped Moscow and Ankara could work together on resolving the conflict.

Pompeo is expected to hold separate talks with Bayramov and Mnatsakanyan. It is not clear whether the two former Soviet republics' ministers will meet directly.

Pompeo said this week he hoped the "right path forward" could be found at the talks, but Armenian Prime Minister Nikol Pashinyan said he saw no diplomatic resolution of the long-running conflict at this stage.

Azeri President Ilham Aliyev has described the prospects of reaching a peace settlement as "very remote", and demanded promises that Azerbaijan will be handed back control of Nagorno-Karabakh.

Azeri forces, bolstered by weapons bought from Turkey, say they have made territorial gains in the latest fighting, including full control over the border with Iran, though Nagorno-Karabakh says its forces have repeatedly repulsed attacks.

About 30,000 people were killed in a 1991-94 war over Nagorno-Karabakh. Armenians regard the territory as part of their historic homeland and accuse Azerbaijan of making a land grab in the recent fighting.