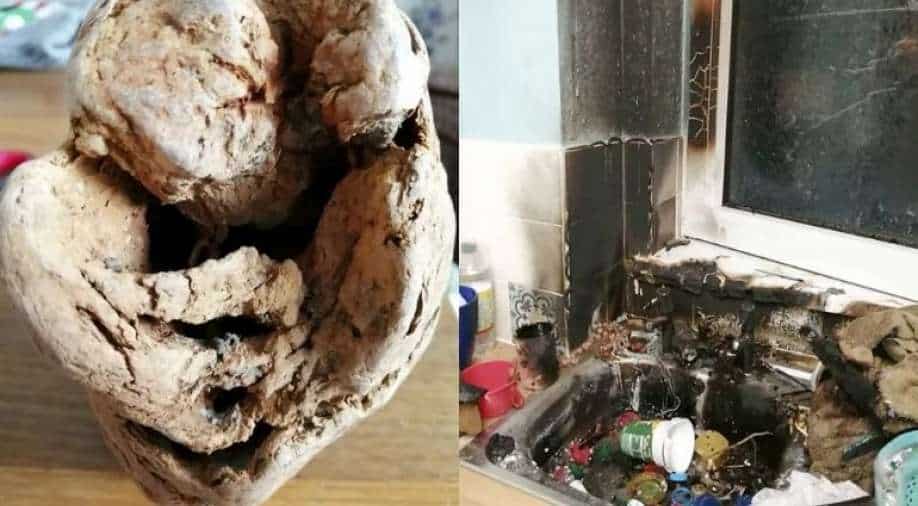 Mother-daughter find fossil on beach that turned out to be a grenade from WWII Photograph:( Twitter )

A 38-year-old beach lover Jodie Crews and her eight-year-old daughter Isabella decided to bring back a unique find from their trip to the beach, only to later realise it was not what they thought it to be.

The Crews found a peculiar-looking thing on the beach and brought it back home assuming it to be some kind of fossil or a bone. Jodie took to social media to ask her friends if they could identify what their rare find was and from which period.

A friend suggested it to be 'whale vomit' and asked the duo to poke it with a hot pin to see if it let out a "puff of white smoke" which could confirm it being 'whale vomit'.

However, when the mother-daughter duo followed their friend's advice, the outer portion of the object started melting and soon turned hot, making sizzling sounds. As soon as Jodie saw the object turning into a fireball, she grabbed the grenade and ran towards the kitchen where she placed it in the sink.

The grenade soon exploded causing destruction in and around the kitchen sink. Recalling the event, Jodie Crews said, "It just turned into a fireball. My daughter screamed and ran out the back door. I grabbed the grenade and ran with it at arm’s length into the kitchen where I hurled it into the sink. We just went into survival mode."

"I then rushed upstairs to soak a towel to throw over it to put it out. The adrenalin must have kicked in and taken over," she explained. "My first thought was to save my daughter, house, cats and dogs. With my daughter safely in the garden I ran back upstairs to get the cats – we have four three-week-old kittens – and rounded up our two dogs."

The neighbours, upon hearing the explosion, rushed to help the duo and called the emergency services. The authorities identified it to be an explosive probably from World War II which would normally have a protective coating of wax.

Crews have been advised not to drink water from their tap for a few days now, fearing the water may be contaminated due to the explosion.

"We often collect pieces of glass and driftwood as we like making things. We are very arty and crafty," Jodie joked. "It had strange ridges and looked more like a piece of bone. It wasn’t very heavy and weighed the same as a bag of sugar. I thought it might be an old knee joint. It didn’t feel metallic at all."