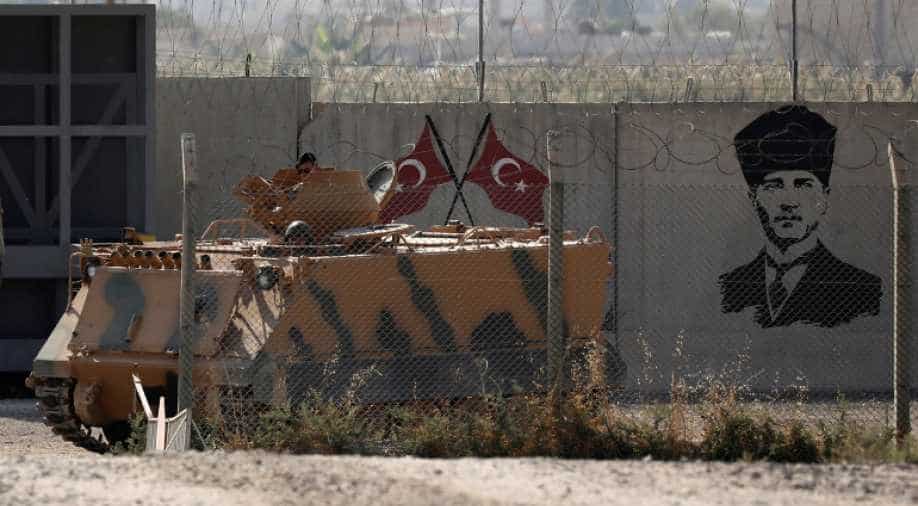 Turkish soldiers in an armored vehicle return from the Syrian town of Tal Abyad Photograph:( Reuters )

More than 20 armoured vehicles were also sent to Syria to help carry out the tasks, Russia's defence ministry said.

The Russian defence ministry said today that around 300 more Russian "military police" have arrived in Syria nearly a week after President Putin and Turkey President Erdogan concluded an agreement to bring hostilities to an end in northern Syria.

According to the deal, Russian police and Syrian guards will be removing all Kurdish YPG militia in the 30 km radius of the Turkish border.

The military police, who arrived from the Russian region of Chechnya, will work to ensure the safety of the population and help Kurdish forces withdraw to a line 30 kilometers (18 miles) from the border, Russia said in a statement.

More than 20 armoured vehicles were also sent to Syria to help carry out the tasks, the defence ministry said in a statement.

Russia's Interfax news agency quoting the Russian defence ministry said the military police would oversee the withdrawal of Kurdish forces along the Syrian-Turkish border. Northern Syria has seen a fortnight of fighting after Turkish forces crossed into the border area on October 9 after US President Donald Trump decided to pull the remaining US troops out of the region.

Hosilities were halted after a US-brokered ceasefire but the area continued to be tense due to presence of Turkish forces. Amid the peace moves, The Kurdish-led Syrian Democratic Forces (SDF) in a statement said that Turkish forces had attacked three villages "outside the area of the ceasefire process".

"Despite our forces' commitment to the ceasefire decision and the withdrawal of our forces from the entire ceasefire area, the Turkish state and the terrorist factions allied to it are still violating the ceasefire process," the statement said.

Turkey considers the YPG, which is part of the SDF as a terrorist organization.