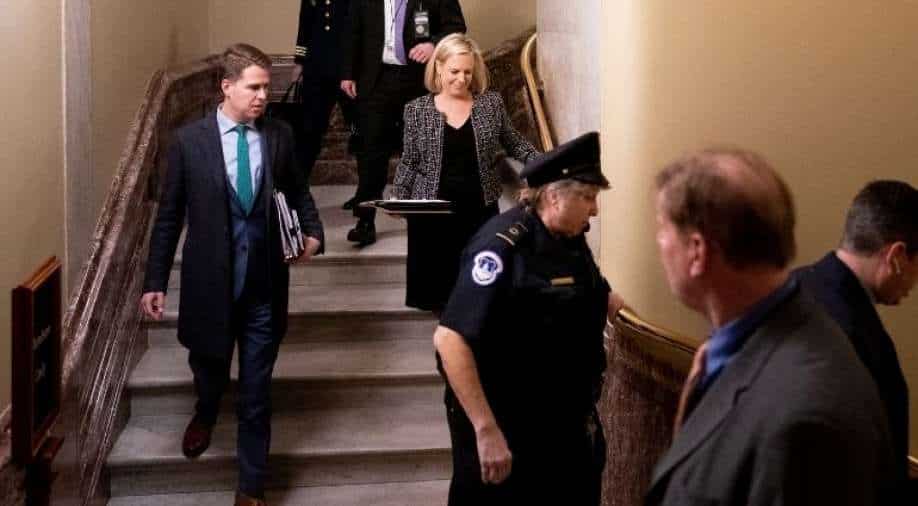 Miles Taylor, the former chief of staff at the Department of Homeland Security, was the anonymous author of The New York Times op-ed article in 2018 whose description of President Donald Trump as “impetuous, adversarial, petty and ineffective” roiled Washington and set off a hunt for his identity, Taylor confirmed Wednesday.

Taylor was also the anonymous author of “A Warning,” a book he wrote the following year that described the president as an “undisciplined” and “amoral” leader whose abuse of power threatened the foundations of American democracy. He acknowledged that he was the author of both the book and the opinion article in an interview and in a three-page statement he posted online.

Taylor resigned from Homeland Security in June 2019 and went public with his criticism of Trump this past summer. He released a video just before the start of the Republican National Convention declaring that the president was unfit for office and endorsed Joe Biden, the Democratic presidential nominee.

But Taylor, who had repeatedly denied being Anonymous, did not reveal himself to be the author of the opinion article and book at the time.

On Wednesday, Trump claimed not to know who Taylor is, despite the fact that there are numerous pictures of the president with Taylor in meetings.

“Who is Miles Taylor? Said he was ‘anonymous’, but I don’t know him — never even heard of him,” Trump wrote on Twitter. “Just another @nytimes SCAM — he worked in conjunction with them. Also worked for Big Tech’s @Google. Now works for Fake News @CNN. They should fire, shame, and punish everybody associated with this FRAUD on the American people!”

The op-ed pages of The Times are managed separately from the news department, which was never told of Anonymous’ identity.

Taylor served for two years as a top aide to Kirstjen Nielsen, Trump’s third homeland security secretary, and wrote in The Times that he was part of a cadre of officials around Trump who were quietly working to “frustrate parts of his agenda and his worst inclinations.”

As a senior administration official, Taylor often interacted with the president at the White House, particularly on issues related to immigration, cybersecurity and terrorism. He left government after Nielsen was fired and later became the head of national security relations for Google. He has been on personal leave from the company for the past several months after endorsing Biden and has been organizing other Republicans to campaign against Trump’s reelection.

Also read| Donald Trump Vs Joe Biden: Which celebrity is backing whom in the US presidential elections

“More than two years ago, I published an anonymous opinion piece in The New York Times about Donald Trump’s perilous presidency, while I was serving under him. He responded with a short but telling tweet: ‘TREASON?’” Taylor wrote in his statement.

“When I left the administration, I wrote ‘A Warning,’ a character study of the current commander in chief and a caution to voters that it wasn’t as bad as it looked inside the Trump administration — it was worse,” he added.

The disclosure of Taylor’s identity is likely to renew the debate over his mdotives and raise questions about whether his position in the Trump administration was senior enough to justify the decisions by The Times’ Opinion desk and the book’s publisher to keep his identity secret. As chief of staff to a Cabinet secretary, Taylor was one of the top political officials in the sprawling, 240,000-person department, with frequent access to Trump and other senior White House officials.

At the time, The Times published the essay with a note that said: “The Times is taking the rare step of publishing an anonymous Op-Ed essay. We have done so at the request of the author, a senior official in the Trump administration whose identity is known to us and whose job would be jeopardized by its disclosure. We believe publishing this essay anonymously is the only way to deliver an important perspective to our readers.”

Taylor’s decision to assail the president anonymously in the Times article created a sensation in Washington because of its claims about the president’s lack of character and inability to govern. In the book, Taylor described Trump as a “12-year-old in an air traffic control tower, pushing the buttons of government indiscriminately, indifferent to the planes skidding across the runway.”

Also read| US election 2020: Surge in 'can I change my vote'; Donald Trump says trend refers to him

Taylor’s essay has had less impact over time as an array of onetime Trump administration officials have come forward with names attached to publicly criticize the president’s leadership and character, among them the former defense secretary, Jim Mattis, and Trump’s third national security adviser, John Bolton. But Taylor’s essay was among the first cracks in the White House defense and led to prolonged speculation about the writer’s identity, with readers pointing to specific passages in it as evidence of who must have been the author.

The White House engaged in its own lengthy hunt to identify who had written the article. In the days after its publication, Trump declared that he wanted the attorney general at the time, Jeff Sessions, to find the writer, saying, “I would say Jeff should be investigating who the author of that piece was because I really believe it’s national security.”

As late as November, the Justice Department demanded to know from the publisher of the forthcoming book whether the author had violated any confidentiality agreements related to classified information.

The president last year called the author of the Times article a “gutless” bureaucrat and tweeted “TREASON?” In a statement ahead of the book’s publication last year, Stephanie Grisham, then the White House press secretary, called the author “a coward” who wrote a “work of fiction” filled with lies about the president.

“Real authors reach out to their subjects to get things fact-checked — but this person is hiding, making that very basic part of being a real writer impossible,” Grisham said.

On Wednesday, Kayleigh McEnany, the president’s current press secretary, called Taylor a “low-level, disgruntled former staffer,” adding that he “is a liar and a coward who chose anonymity over action and leaking over leading. He was ineffective and incompetent during his time as DHS chief of staff.”

McEnany said that “it is appalling a low-ranking official would be granted anonymity, and it is clear The New York Times is doing the bidding of Never-Trumpers and Democrats.”

In the book, Taylor said he decided to remain anonymous because he believed that revealing his identity would have allowed Trump and his allies to distract attention from the substance of the critique he leveled against the president.

“I have decided to publish this anonymously because this debate is not about me,” Taylor wrote. “Removing my identity from the equation deprives him of an opportunity to create a distraction. What will he do when there is no person to attack, only an idea?”

In his statement Wednesday, Taylor acknowledged that “some people consider it questionable to levy such serious charges against a sitting president under the cover of anonymity.” But he said he his decision was justified.

“Issuing my critiques without attribution forced the president to answer them directly on their merits or not at all, rather than creating distractions through petty insults and name-calling,” Taylor wrote. “I wanted the attention to be on the arguments themselves. At the time I asked, ‘What will he do when there is no person to attack, only an idea?’ We got the answer. He became unhinged. And the ideas stood on their own two feet.”

Danielle Rhoades Ha, a spokeswoman for The Times, said in a statement that “we take seriously our obligations to protect sources.”

She added: “Many important stories in sensitive areas like politics, national security and business could never be reported if our journalists violated that trust. In this case, however, the writer has personally waived our agreement to keep his identity confidential. We can confirm that he is the author of the Anonymous op-ed. We don’t plan to comment further.”

The book’s publisher, Sean Desmond of Twelve Books, said in a statement that the company was proud of the book, which he said “every day seems more and more prescient.”

He added, “Miles Taylor has been a great publishing partner, and we support him and the true act of political courage it took to tell his story.”

The publisher has said that Taylor declined to take any advance payment for writing it and has pledged to donate a large portion of any royalties to nonprofit organizations, including the White House Correspondents’ Association, the membership organization for reporters who cover the president.