Wasserman believes that while polls are more stable in comparison to four years ago, President Trump is underperforming and though the race may tighten in the upcoming week, his path looks increasingly difficult

With exactly one week to go for the US election 2020, Dave Wasserman, the polling guru who forecasted Republican candidate Donald Trump's 2016 win, is betting on Democratic candidate Joe Biden this time.

Wasserman believes that while polls are more stable in comparison to four years ago, President Trump is underperforming and though the race may tighten in the upcoming week, his path looks increasingly difficult.

Democratic presidential challenger Joe Biden leads President Donald Trump by a solid margin in Wisconsin and maintains a narrower advantage in Pennsylvania with just over a week until November 3. 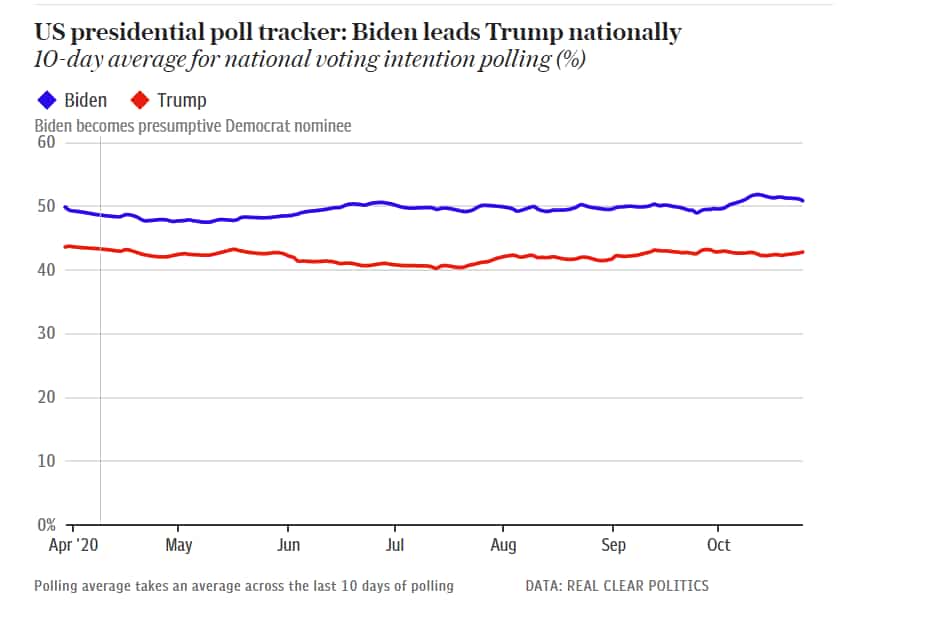 Wasserman has predicts that six states, Wisconsin, Pennsylvania, Michigan, North Carolina, Florida and Arizona, will play critical roles in deciding whether Trump wins a second term in office or if Biden ousts him.

He highlighted the possibility of the race getting closer to where it was in September, which was when Biden had an average lead of more like 7 or 8 points than 10.

Trump does not have a lot of margin for error as Biden has a much more stable lead in comparison to Hillary Clinton for years ago.

Biden's lead increased in October after Trump, who faced criticism for downplaying coronavirus pandemic as a ''flu'' and a ''hoax'', himself contracted the novel virus.

As COVID-19 hits swing states, Biden and Trump showed sharp contrast. While Trump said America was turning the corner in the fight against COVID-19 and mocked Biden's more cautious campaigning style. Biden warned that the cold months ahead could be even harsher due to a resurgence of the virus, which has killed more people in the United States than anywhere else and is on the rise in several battleground states.

Wasserman says that in 2016, polls chronically undersampled Trump’s base of support, and that led a lot of the media astray. And the polls are far from perfect in US election 2020 as well as there’s a lot of disagreement between online polls and live-interview polls.