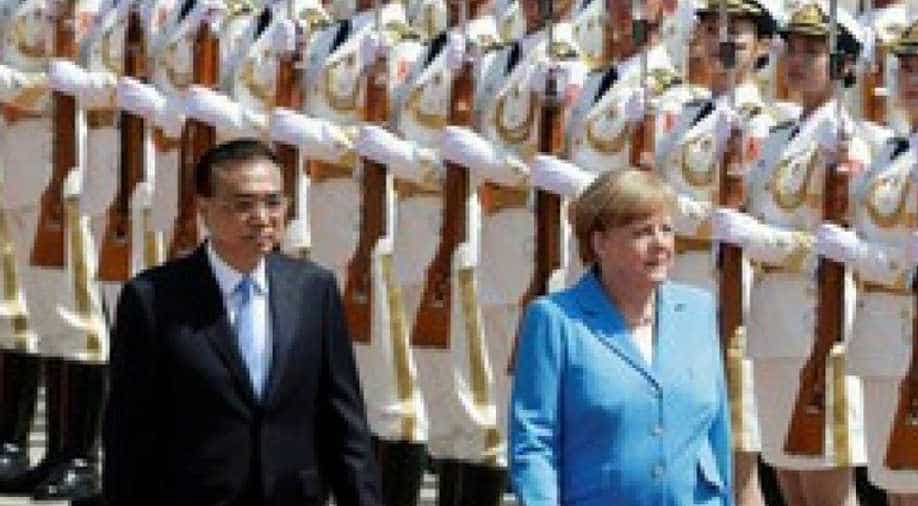 China said on Thursday it would "open its door wider" to German businesses, helping to visit Chancellor Angela Merkel defend free commerce and counterbalance trade threats from US President Donald Trump that are testing transatlantic ties.

Germany and China, two exporting nations that run large trade surpluses with the United States, have found themselves in Trump's firing line and are scrambling to preserve the rules-based multilateral order on which their prosperity rests.

Merkel faces a delicate balancing act on the China trip, her 11th since becoming chancellor in 2005, as she seeks to show Chinese-German solidarity over free trade and the Iran nuclear deal without harming German ties with long-term ally Washington.

In the latest US trade move that has alarmed Beijing and Berlin alike, the Trump administration announced on Wednesday a national security investigation on into car and truck imports that could potentially lead to tariffs.

The announcement hurt share prices of both European and Asian carmakers. China vowed to protect its interests.

European countries are also concerned that their exporters could be hurt if China instructs importers to buy more US goods to ease trade disputes with the Trump administration. China has already signalled to state companies to buy more U.S. oil and soybeans, trade sources told Reuters.

Premier Li Keqiang, in a joint media appearance with Merkel at Beijing's Great Hall of the People, said China and Germany both upheld global free trade and stressed the huge potential for cooperation between them.

Though the two countries had problems, they could be overcome, Li said. "China's door is open. You can say it will open even wider," Li said, standing next to Merkel and stressing "friendly relations" with Germany.

Trump's "America First" trade policy, his administration's professed disdain for the World TradeOrganisation, as well as his withdrawal from the Iran nuclear deal, have pushed China and Germany into closer alignment, German officials say.

However, Merkel's government also shares many of the Trump administration's concerns about Chinese business practices, including what many Western countries have complained are state-backed efforts to pressure foreign companies into giving up trade secrets.

Li said China would protect the interests of German firms investing in China and adjust its rules if needed.

"If they come across any problems during their investment, especially when it comes to legal protections, I can clearly tell you that China is striding forward to being a country with rule of law," Li said.

German companies have complained for years about barriers to the Chinese market and the theft of intellectual property.

Merkel welcomed China's recent announcements that it would further open its financial sector to foreign participation and reduce Chinese joint venture requirements in sectors such as automobiles, a mainstay of German investment in the world's second-largest economy.

But German industry said it was now up to China to deliver on its promises of greater openness.

Germany and China should work on a "multilateral global system", Merkel said, stressing her attachment to the rules-based global framework that Trump is challenging.

Trump has also pushed Europe to work more closely with China by pulling out of a 2015 deal between world powers and Iran under which international sanctions against Tehran were lifted in return for Iran accepting curbs on its nuclear programme.

European countries, Russia and China, which were parties to the deal, are searching for a way to salvage it by continuing to offer economic benefits to Iran in return for its compliance.

Merkel, who personally lobbied Trump not to pull out of the pact but was rebuffed, said Germany and China were "united in the view that we do not want to put this agreement in doubt".

European companies could reduce their business with Iran if they risk US sanctions for trading there, Merkel said, adding with a nod to China: "Of course, this creates the possibility for others to then get more into Iran."