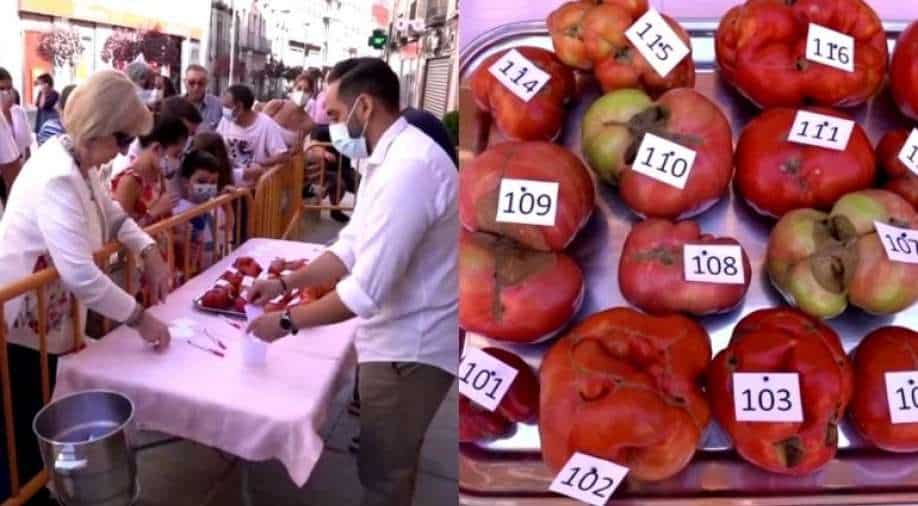 The 'ugliest tomato' competition being held in northern Tudela. Photograph:( Others )

Along with the Tomatina festival, Spain also celebrates the 'ugliest tomato' competition every year. The competition, which is held in northern Tudela, fills farmers with joy. In the 14th edition of the competition, dozens of ugly tomatoes competed for the award

There is more to tomatoes than it meets the eye. Spanish people seem to be the ones to realise it truly though.

Along with the annual Tomatina festival, the country also celebrates the unusual 'ugliest tomato' competition every year in northern Tudela.

The love for the red and wrinkled is old in this part of the world. The competition fills farmers with joy. The winner Spanish family also got an Iberian ham as the prize.

In the 14th edition of the competition, dozens of ugly tomatoes competed for the award, which was decided by a popular jury.

Known as "Ugly tomato of Tudela", the type of tomato is an old tomato of the Marmande variety. It is grown mainly in the Navarre region.

Also Read: Pace to reach space shoots up as SpaceX set to launch billionaire into orbit

Rather than round and smooth, some of this variety of tomato ends up twisted.

Some say they get the ugly tomatoes by luck, while others blame the failed pollination by bees for the result.

The competition also includes a tasting of quality and flavour of 'normal' tomatoes.