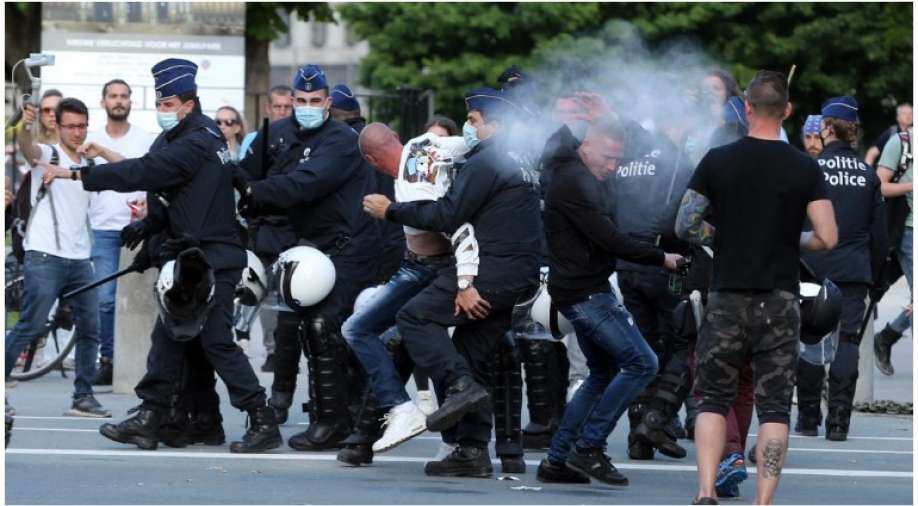 Belgian policemen detain a man as demonstrators protest against the restrictions aimed at curbing the spread of the coronavirus Covid-19, in Brussels on May 29, 2021 Photograph:(AFP)
Follow Us

The protest started in a major park in the city. The protesters then marched towards a square where EU buildings are located

Hundreds of maskless protesters opposed coronavirus restrictions and held demonstrations in front of European Union (EU) buildings in Brussels on Saturday. There were many who yelled "Freedom" and claimed that Covid-19 was no worse than Flu.

The protest started in a major park in the city. The protesters then marched towards a square where EU buildings are located.

Belgian police blocked access to the square with barbed wire and a line of 40 officers in riot gear prevented demonstrators moving closer.

A water cannon idled nearby but was not used, and the protest dispersed after around four hours.
"There is no corona(virus). It's just the flu," one demonstrator who gave her first name as Miriam, 48, told AFP.

Like many in the crowd, she was from the neighbouring Netherlands. "Belgium is having a hard time and I'm here for my children," she said.

A half a dozen middle-aged men wore camouflage uniforms and berets but declined to speak to reporters.

Online posts said supporters of a far-right Belgian soldier, Jurgen Conings, who has been on the run for two weeks after stealing weapons from an army base and leaving a letter threatening high-profile figures, were joining the protest.

A woman was quoted by news agency AFP as calling this a war.

"It's war they want -- look at them, look at us," she said referring to the armoured riot police.

Belgium is loosening coronavirus restrictions that have been in place for the past seven months as the pace of Covid-19 vaccinations has accelerated and as the number of infections and hospitalisations are slowly falling.

However the wearing of masks is still mandatory, including outdoors, and while outdoor areas of restaurants, cafes and bars are now open, there are limits on how many people can gather together.

US officials suspect Israel’s involvement in drone attack on Iranian 'workshop': What we know so far