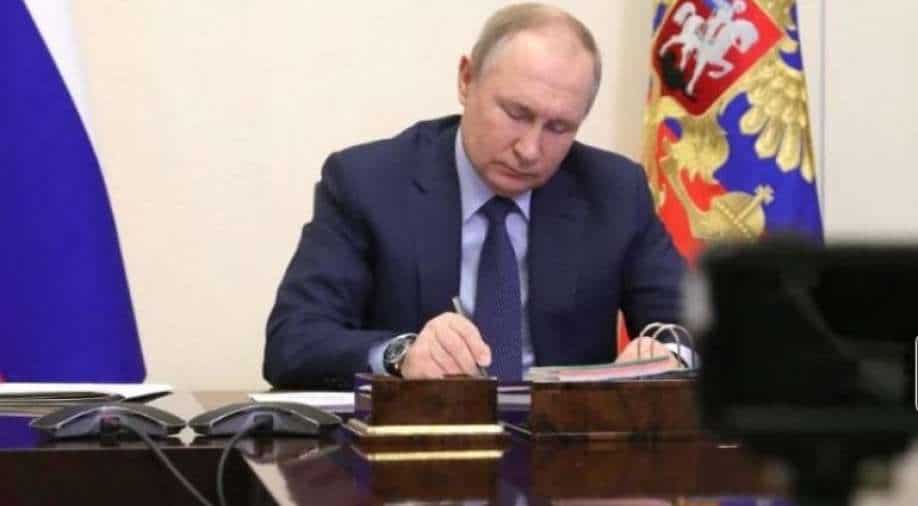 Russian President Vladimir Putin attends a meeting with officials and cultural workers, including young holders of prizes for cultural achievements, via a video link in Moscow, Russia March 25, 2022. Photograph:( Reuters )

Biden has stepped up personal attacks on Putin since the Russian president ordered the invasion of Ukraine last month, and the Kremlin has replied by questioning the US leader's state of mind.

The Kremlin dismissed a remark by U.S. President Joe Biden on Saturday that Vladimir Putin "can not remain in power," saying it was up to Russians to choose their own president.

Asked about Biden's comment, Kremlin spokesman Dmitry Peskov told Reuters: "That's not for Biden to decide. The president of Russia is elected by Russians. "

A White House official said Biden, who was speaking in Warsaw, had not been calling for "regime change" in Russia, but his point was that "Putin cannot be allowed to exercise power over his neighbours or the region".

Peskov did not immediately respond to a follow-up request for reaction to the White House clarification.

Biden has stepped up personal attacks on Putin since the Russian president ordered the invasion of Ukraine last month, and the Kremlin has replied by questioning the U.S. leader's state of mind.

Last week, it accused Biden of making "personal insults" towards Putin after he labelled him a "war criminal" and a "murderous dictator", and said his remarks appeared to have been fuelled by irritation, fatigue, and forgetfulness.

Dmitry Rogozin, the outspoken head of the Russian space agency Roscosmos, suggested mockingly on social media that the clarification of Biden's latest remarks had come from the White House medical unit.

Rogozin has previously derided what he called "Alzheimer's sanctions" imposed on Russia by the United States over the war in Ukraine, which Moscow calls a special military operation.