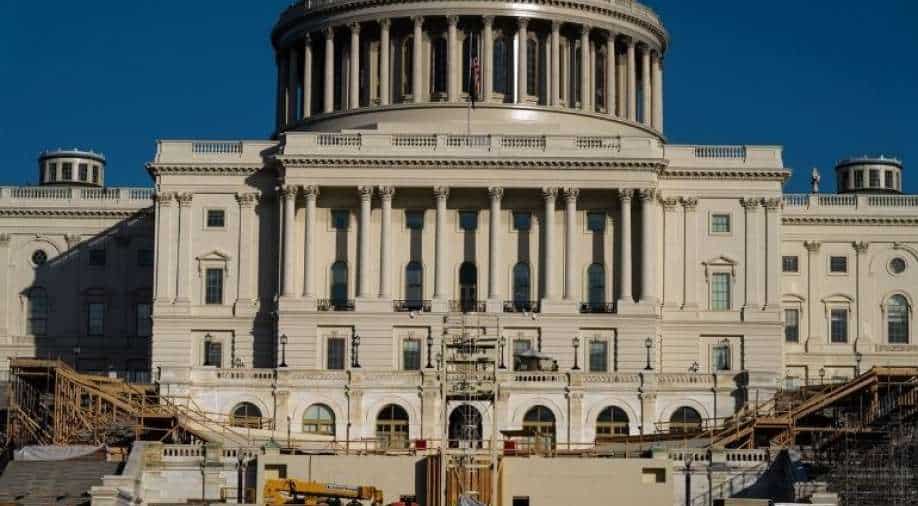 FILE -- The inaugural platform under construction in Washington on Oct. 26, 2020. The pomp and circumstance of America’s quadrennial presidential inauguration is colliding with the grim reality of a pandemic that is likely to still be raging on January 20, 2021. (Anna Moneymaker © 2020 The New York Times) Photograph:( The New York Times )

Unlike Joe Biden, if Trump had won reelection, he was expected to shrug off the health threats in favor of huge crowds for his inauguration

The stage being built on the West Front of the Capitol can hold 1,600 spectators for a close-up view of President-elect Joe Biden as he takes the oath of office. The reviewing stand under construction in front of the White House will be ready for the inaugural parade and thousands of cheering onlookers as the marchers pass by. And the National Mall is prepared to accommodate many more.

But the traditional pomp and circumstance of America’s quadrennial version of a coronation is colliding with the grim reality of a pandemic that is likely to still be raging on Jan. 20. For that reason, Biden’s team is signaling that he wants a very different kind of inauguration.

If he had won reelection, President Donald Trump was expected to shrug off the health threats in favor of huge crowds for his inauguration. But Biden has already indicated that his will not be business as usual. In a statement Monday, the newly appointed chief executive of Biden’s inaugural committee hinted at the looming balancing act between health and politics. 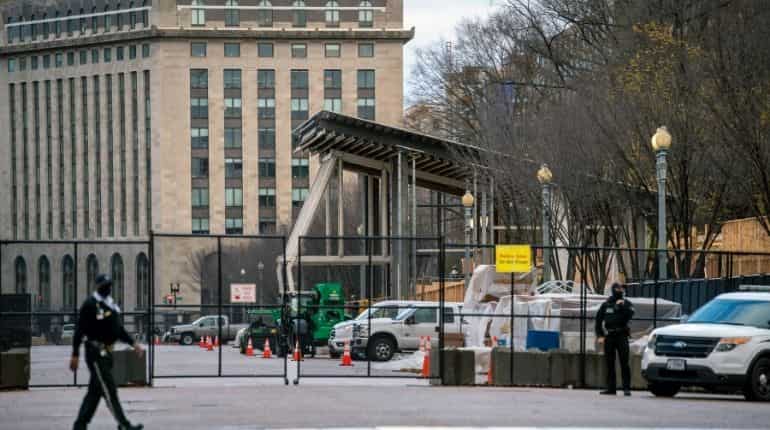 “We will honor the American inaugural traditions and engage Americans across the country while keeping everybody healthy and safe,” said Tony Allen, the president of Delaware State University and the committee’s chief executive.

Aides to the president-elect are being coy. But Biden’s approach to campaigning during the pandemic — which included drive-in rallies, socially distanced news conferences and a largely virtual national convention — provides a blueprint for how events might be reshaped for the COVID era.

On Capitol Hill, where the official inaugural ceremonies are arranged by a bipartisan congressional committee, lawmakers and aides have quietly been at work since long before the election trying to reimagine what a transfer of power during a pandemic might look like.

The short answer is: quite a bit less crowded.

The organizers are determined that Biden take the oath of office and deliver an address to the nation outside the West Front of the Capitol, preserving an iconic tableau that has often set the tone for a new presidency. But to make it happen, they are likely to slash the number of officials flanking Biden. Those who do make the cut — Supreme Court justices, former presidents, top House and Senate leaders and the Joint Chiefs of Staff among them — will be required to socially distance and wear masks. Some may be asked to take coronavirus tests.

The most difficult challenge may be keeping away crowds. Congress typically distributes 200,000 tickets for seats near the platform. Sen. Roy Blunt, R-Mo., who is overseeing the planning on Capitol Hill, has indicated that number could be cut drastically. 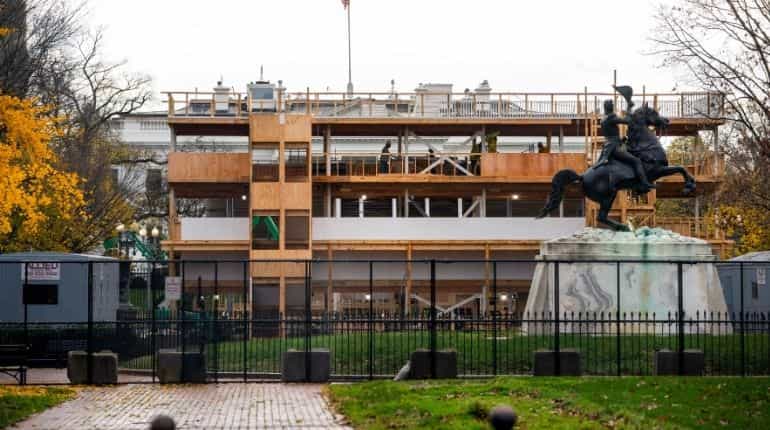 Inaugural planners are still debating whether they can salvage a luncheon in National Statuary Hall at the Capitol, where more than 200 dignitaries and guests have honored the new president since the 1950s. They may also alter or cancel a smaller signing ceremony in the ornate President’s Room off the Senate floor. A traditional military review on the East Front of the Capitol, on the other hand, may still go on in some form.

The planning has been overshadowed by congressional Republicans, including Blunt, who have not refuted the president’s baseless claims that he defeated Biden. Blunt turned heads during a television appearance over the weekend, when he refused to unequivocally congratulate Biden as the victor. But Paige Waltz, a spokesperson for the congressional inaugural committee, said Monday that while “the electoral process is still playing out,” Blunt’s team would begin coordinating with Biden’s.

One uncertainty for lawmakers: whether Trump will agree to attend his successor’s inauguration given his complaints about what he calls a rigged election. If he declines, he will be only the fourth president to deliver such a snub, after John Adams, John Quincy Adams and Andrew Johnson.

But Democrats have signaled that they have seen no partisan interference in the planning process and expect a smooth inauguration.

“While the pandemic will make this inauguration look different than previous years, we are committed to creating a safe ceremony that reflects the significance of the occasion,” Sen. Amy Klobuchar of Minnesota, Blunt’s Democratic counterpart, said in a statement.

Given the worsening pandemic, it is unclear whether Biden might seek to proactively discourage Americans from traveling to the nation’s capital to witness the inauguration in person by gathering on the Mall in the shadow of the Washington Monument and the Lincoln Memorial. Those spaces are usually open to the public without restrictions during the ceremony.

In December 2008, the committee organizing the inauguration of President-elect Barack Obama issued a news release announcing that “for the first time, the entire length of the National Mall will be opened to the public so that more people than ever before will be able to witness the swearing-in of the president from a vantage point in sight of the Capitol.”

Biden’s committee has no plans to issue a statement like that.

One thing is definite: Biden’s inauguration will not be the kind of over-the-top celebration that Trump has often talked about wanting, with Army tanks and fighter jets. Instead, people close to Biden suggest that he will use the model of his campaign, which sought to preserve some of the excitement of big political events while devising them to minimize the spread of the virus.

At the Democratic National Convention, Biden delivered his acceptance speech between recorded video segments highlighting the diversity of the nation. At rallies, the former vice president often spoke in front of people gathered in their cars, honking their horns. And when he declared victory in Wilmington, Delaware, his campaign launched fireworks.

Could there be a drive-in inaugural celebration? Might a parade of cars with Delaware license plates — Biden’s home state — be a safe way to ring in his presidency? The Biden inaugural committee is not saying.

Addisu Demissie, who helped design and run the Democratic National Convention this summer, said the trick would be to combine in-person elements from a traditional inauguration with virtual, Internet-based moments that bring in voices of people who cannot travel to attend the celebration.

“To me, that’s the core challenge,” Demissie said. “You have to include the traditional elements. But you can’t just take the model that existed four, eight or 12 years ago and put it on Zoom. You have to create some new traditions. The circumstances demand that.”

After spending months warning about the dangers of hosting large gatherings indoors — and criticizing Trump for doing so — Biden is unlikely to host fancy inaugural balls where hundreds of supporters are crammed into ballrooms.

That would be a sharp departure from the past three inaugurations. Obama hosted elaborate galas attended by A-list Hollywood celebrities for both of his inaugurations, including a late-night concert at the Lincoln Memorial that hundreds of thousands of people attended. Trump held three official balls.

A parade is also in question.

Newly inaugurated presidents have often participated in a slow drive along Pennsylvania Avenue and then watched local marching bands and other floats from the reviewing stand near Lafayette Park. The stand for January is ready, but hosting a parade would invite large crowds to gather along the route, something that Biden is likely to want to avoid.

A scaled-back celebration could also be cheaper to put on because of fewer security and travel costs, though Demissie said that producing video and broadcasting from remote locations for a more virtual inauguration would also be costly.

There were signs Monday that though Biden may not be trying to top his predecessor, who raised a record $107 million for his 2017 festivities, he would welcome donations from wealthy individuals and corporations.

Biden’s team indicated that it would accept donations of up to $500,000 from individuals and up to $1 million from corporations, according to an official involved in the planning. The cap is set by each president and has fluctuated over the years, as incoming executives have used the inauguration to set the tone for their presidencies. Obama, for instance, banned corporate gifts altogether in 2009 and capped individual gifts at $50,000 before easing restrictions in 2013. Trump, on the other hand, accepted $5 million from Sheldon Adelson, the conservative casino mogul.

Biden’s team has sent something of a mixed message. His inauguration will not accept donations from fossil fuel companies, defined as “companies whose primary business is the extraction, processing, distribution or sale of oil, gas or coal,” or their executives — a group that gave Trump about $10 million. Nor will Biden accept funds from registered lobbyists.

But that is a relatively small subset of Washington’s lucrative influence industry, and Biden’s team indicated that it would still accept some gifts from corporations and trade associations, which typically shower incoming presidents’ inaugurations with cash to promote goodwill with officials. It remained to be seen whether Biden would put together the kind of exclusive, VIP packages that typically woo big donors.

He also selected Katie Petrelius, the national finance director who oversaw an effort that raised record sums for his campaign, to serve in a similar role as the top fundraiser for his inauguration, according to a person familiar with the appointment.